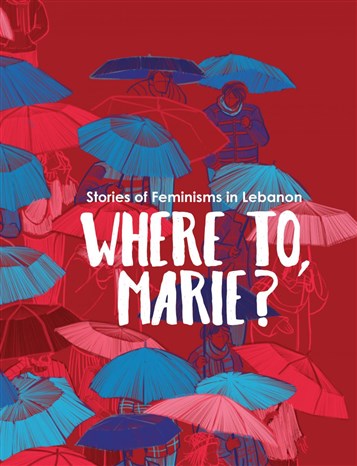 Bernadette Daou and Yazan Al-Saadi (BD & YS): A lot of things. On his part, Yazan has a great love of comics, had previously written non-fiction comics for The Nib in 2017, and wanted to try working on and publishing a comic himself—as well as learning from that experience and its impact. In the summer of 2019, we spoke of the idea of transforming Bernadette’s interesting and important research on the history of the feminist movements in Lebanon, which she had worked on between 2010 and 2015, into a comic. Bernadette’s research was ethnographical work, based on interviews with a lot of activists across multiple generations. When the uprising erupted in Lebanon in October 2019, we both felt that a comic about this history and the politics surrounding it were important.

BD & YS: This comic presents the story of how feminist movements in Lebanon are part and parcel of the greater struggles in our societies. The issues we present here are various components at the heart of feminist movements, ranging from the fight against manifestations of patriarchy regardless of political ideology, intersectionality, class dynamics, the nature of Lebanese politics and society, and the evolution of time. In the process of developing the book, we decided to personalize history, zooming away from bigger moments and instead looking at personal stories, which are collected and represented in the characters depicted throughout our comic.

The comic is structured around four chapters, as well as an intro and outro, with each chapter representing an amalgamated story of what was happening to the women’s movements at different points of time. It was awesome that we were able to bring in various talented women artists (Razan Wehbi, Rawand Issa, Trach Chahwan, Joan Baz, and Sirene Moukheiber) to handle each of the chapters (and the intro/outro), giving the sections and characters more flavor, uniqueness, and personality. Then we brought in an awesome translator and writer, Lina Mounzer, who translated the work from Arabic to English and really made it linguistically organic and seamless. Finally, the other key component was the web developer, Layal Khatib, who we worked with to create a very user-friendly and light website to host the comic, so that audiences can either read it directly there in English or Arabic, or download their own copy to print and keep at home.

BD & YS: This book is a natural continuation of what we have always wanted, in different ways. For Yazan, it was an opportunity to develop comics that incorporate facts and fictions in service of a political stance on certain topics, especially those related to the West Asian and North African region. It was a powerful experience and he learned a lot about the efforts needed to self-publish a comic, ensuring everyone is treated fairly and gets their due. For Bernadette, this was the first time she wrote in the Lebanese dialect and the first time that she wrote a comic. The research process was particularly interesting because it allowed her to meet all many feminist activists, get to know them through the interviews, and sometimes even live with them.

BD & YS: We hope anyone, really, will read this book! The impact we want is a better understanding and appreciation for feminist struggles in the region and elsewhere, as well as encouraging a passion for the comic medium. On this latter point, we strongly believe that in the region, we (creators, writers, and so on) are awesome, we are talented, and we can speak for and about ourselves in our own terms—and we want to see more of this!

YS: I am working on a couple of short comic strips, among other scattered types of writings I do, such as research work on Syria, part-time work as a managing editor for The Public Source, trying to reflect on the future of social movements in the region as things are getting worse, and dabbling with works of fiction. Ultimately, I would love to create another comic book like this every year, if people are game.

BD: Meanwhile, I am working as a freelance translator and am thinking about doing a more creative project – so watch this space!

J: What role did your gender play in this project and in engaging with the subject of feminism?

YS: I think when it comes to men and their interaction with feminism and feminist topics, past practice has been abysmal. I am part of that problem in many ways. With that in mind, my gender is important in this process and cannot be ignored. One thing which required sensitivity was my professional and personal role—I tried to just sit and listen more during the discussions and the behind the scenes. In terms of writing, I was focused on the “physics” and “engineering” of comic making, and jumping in to contribute on character dynamics and asking questions here and there, while Bernadette really took the lead on the main components of the history and the articulation of the basic components that drove each epoch in the story of feminism(s) in Lebanon.

Excerpt from the book (Introduction: The Meeting, pp. 1-5) 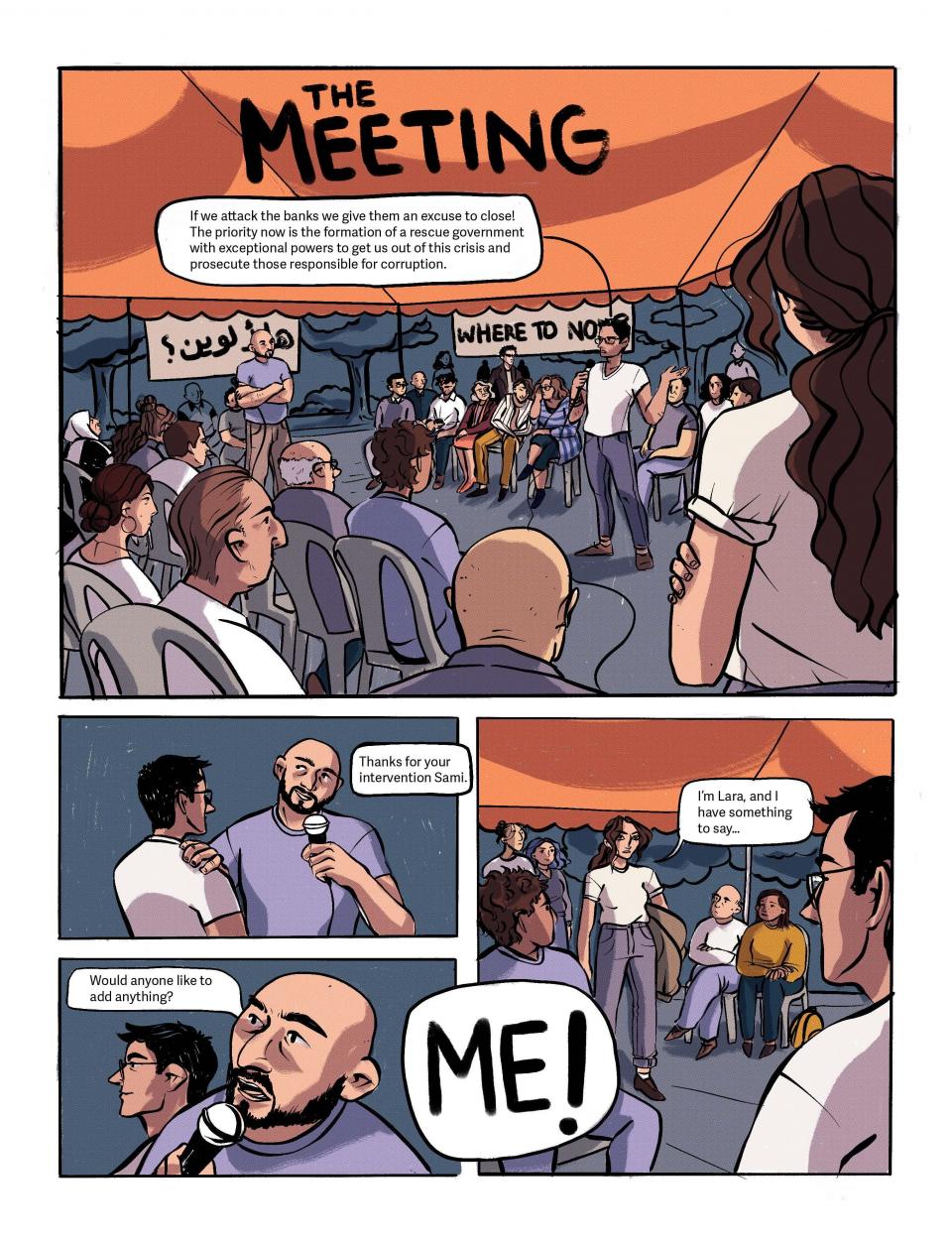 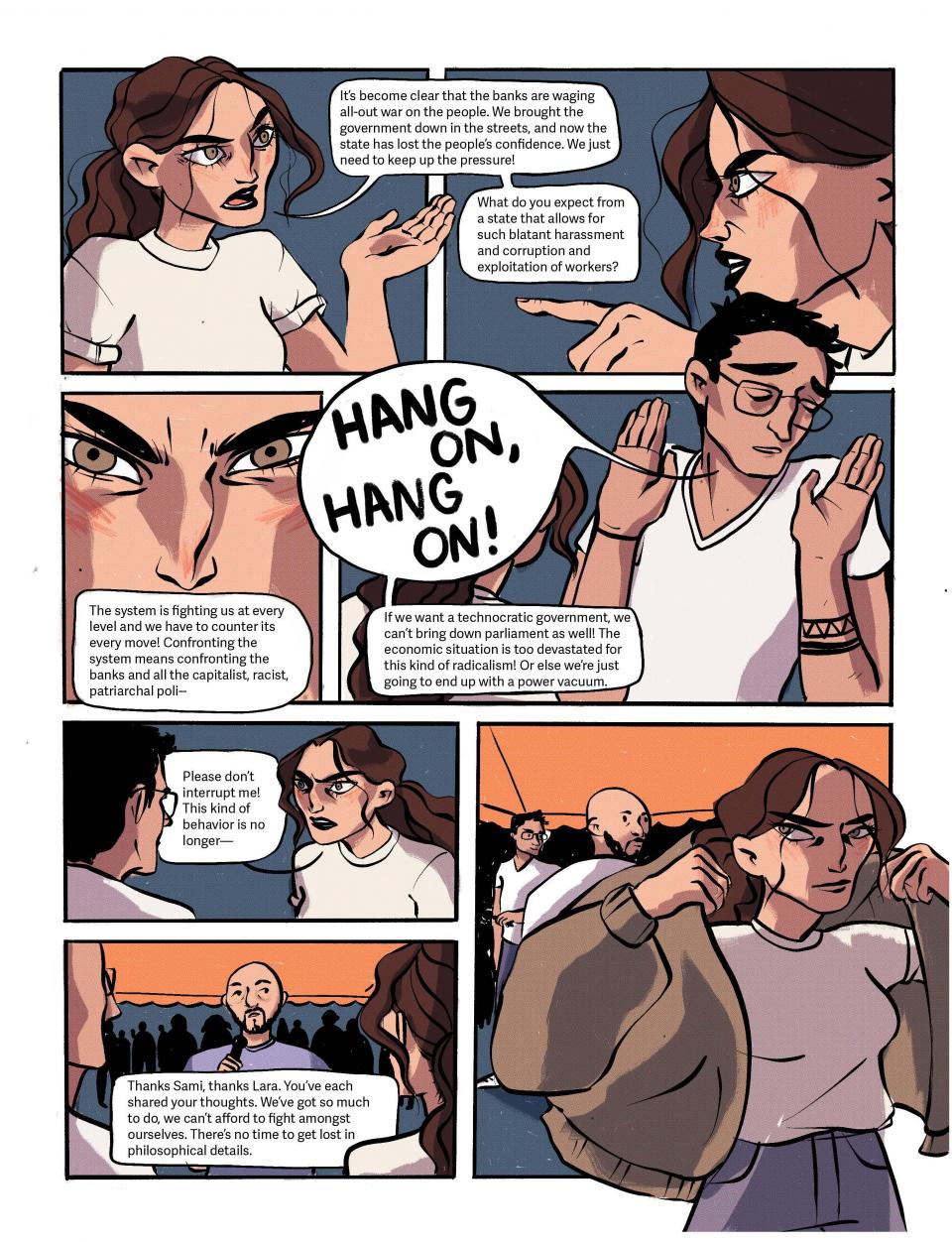 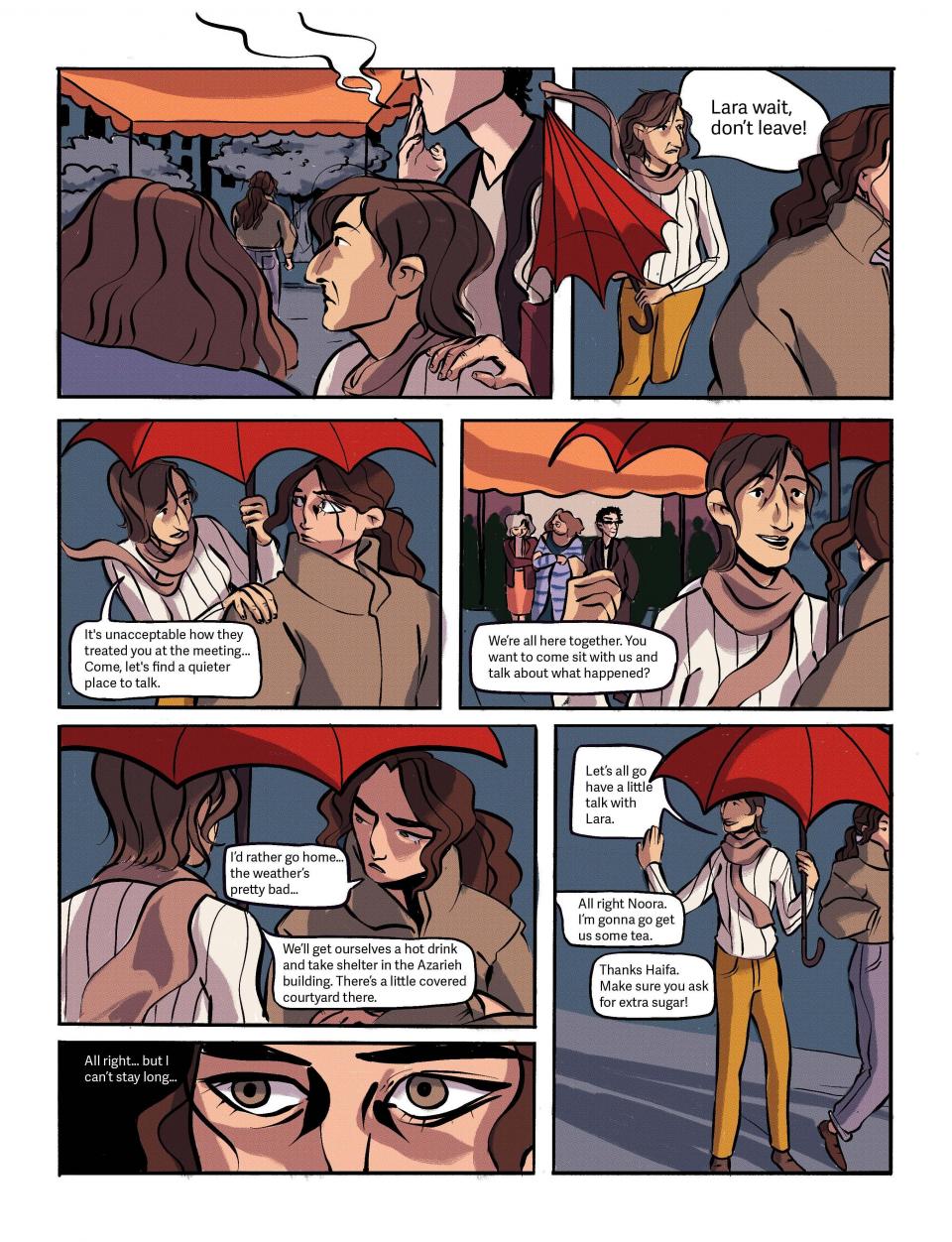 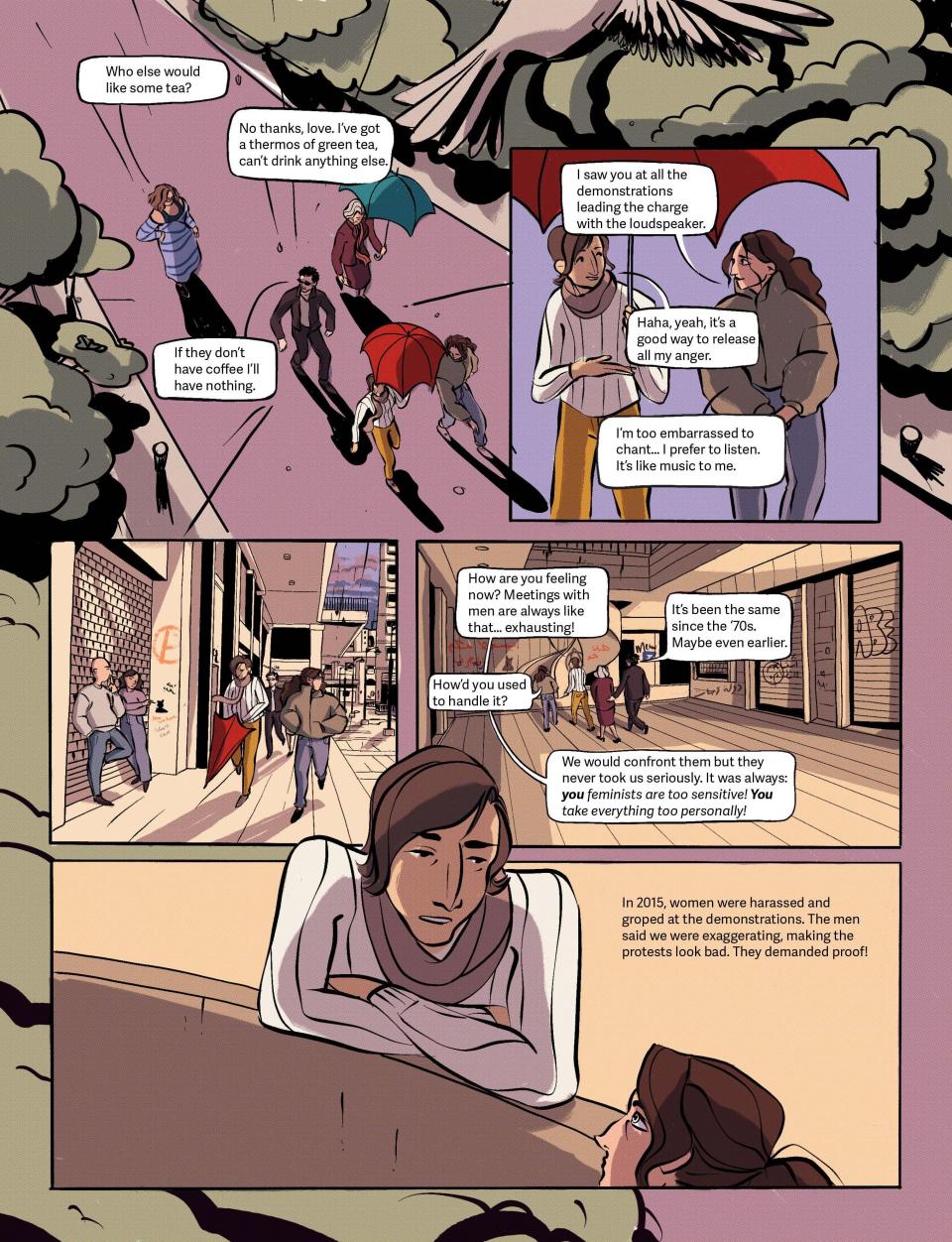 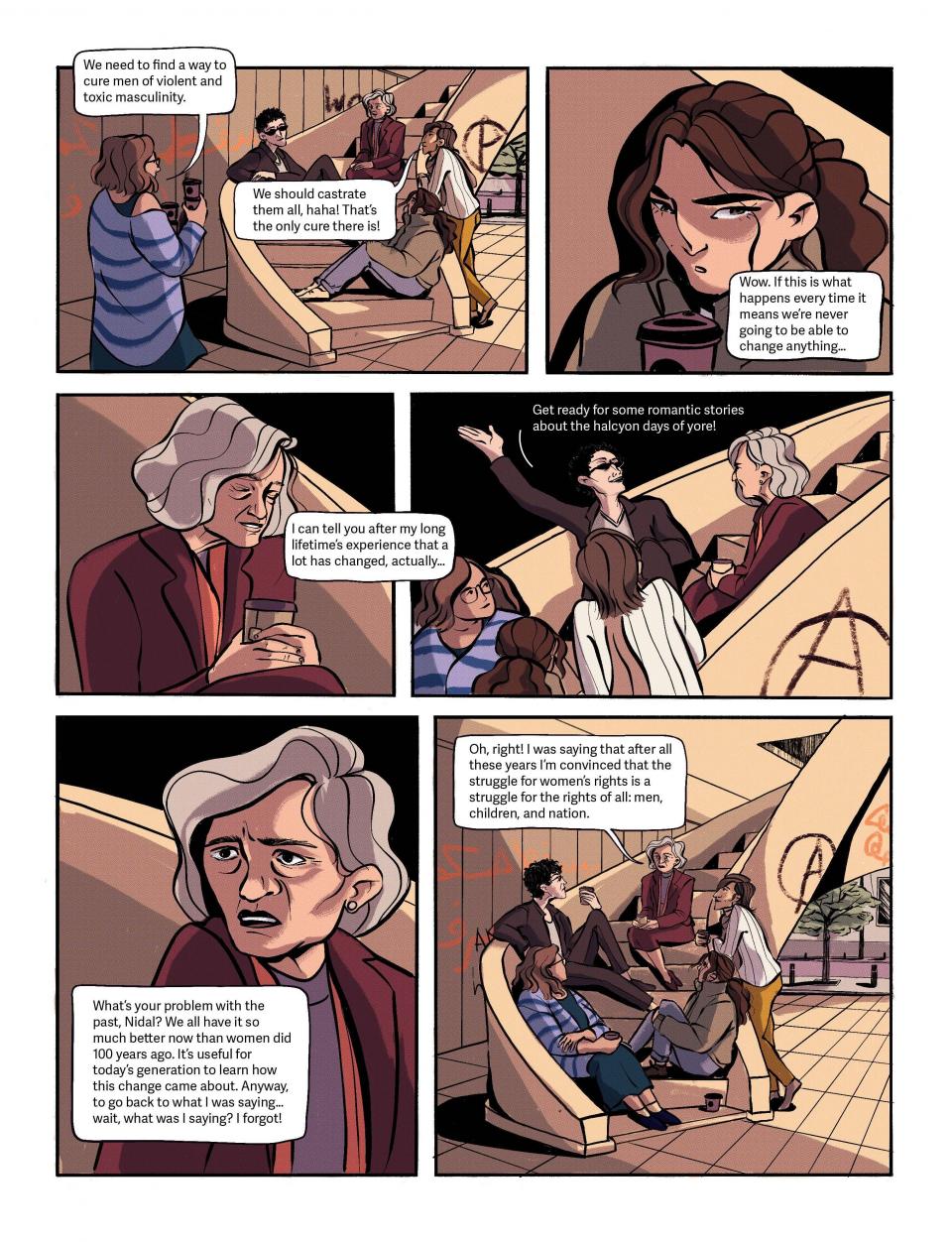