The Palestinian Authority in the West Bank 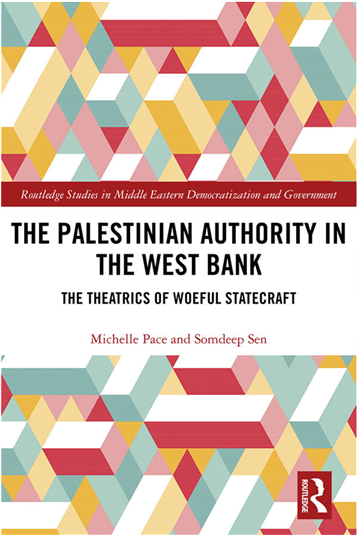 Michelle Pace and Somdeep Sen, The Palestinian Authority in the West Bank: The Theatrics of Woeful Statecraft(Oxon: Routledge, 2019).

Michelle Pace and Somdeep Sen (MP & SS): This book spans a significant part of our working life—both of us have carried extensive ethnographic work in the occupied Palestinian territories (oPt), covering Gaza, the West Bank, and East Jerusalem over a number of years. During the course of our work we have made friends, met with people in high positions of power (both in the territories and globally), and encountered many activists—all of whom have shaped in one way or another the making of this book. The work here is therefore deeply personal for the two of us. For Somdeep, Palestine remains at the core of a global struggle for indigenous rights and against a continuing colonial international order. For Michelle, it is a continuation of her commitment to the Palestinian cause that she first learned about as a child, listening to her grandfather narrating the tragedy that befell Palestinians as a consequence of the Nakba of 1948. We have also been encouraged by and received substantial support from dear colleagues, as well as the Carlsberg Foundation (Denmark), which generously funded our fieldtrips over the course of two years.

MP & SS: The Palestinian Authority in the West Bank integrates performance studies and politics to suggest an understanding of the theatrics of woeful statecraft in Palestine. In this book we challenge the existing literature on state-building and the apparent fixity on the state; instead, we shed light on how the discursively produced and constantly alluded to notion of “a Palestinian state” relies on endless acts of performance to call it into being. Our focus is therefore on how the nature of Palestinians’ statelessness has to contend with the rituals of statecraft that the Palestinian Authority (PA) and its civil servants/fonctionnairesengage in. We further shed light on how these rituals are economically maintained by an international donor industry, while being vehemently challenged by Palestinian activists antagonistic to the prevalence of the statist agenda in the oPt. Our primary concern is therefore the manner in which these stakeholders—whether invested in or antagonistic to the PA—make sense of its statecraft while cognizant of the reality that the PA is in fact performing a state that does not exist.

MP & SS: Michelle’s previous work has been located in the area of discursive constructions of the Mediterranean/Middle East and North Africa in the making of EU policies towards its southern neighborhood. In this book, she zooms in on the specific case of the discursive construction of the notion of a Palestinian state—not only in the policy agenda of the EU, but also that of other international actors invested in the imperative of state-building and the impact of this discursive machinery on the everyday lives of ordinary Palestinians in the oPt.

Somdeep’s doctoral research took a postcolonial perspective on the politics of Hamas as an armed resistance movement and government in the Gaza Strip. His dissertation argued that Hamas’s armed operations were anticolonial in nature, while its governance is not unlike that of a postcolonial state. In his follow-up book, Somdeep further explores his interest in the dynamics of statecraft in a non-state context, and brings together perspectives of both international stakeholders who are invested in the upkeeping of the PA, and stateless Palestinians who are still struggling for sovereign statehood.

MP & SS: From a pedagogical point of view, the book is an essential resource for students and scholars interested in the study of the state, International Relations and Politics, Palestine Studies, and the Middle East. In particular we hope that students of these disciplines who have not yet seen the reality of Palestinians in the occupied territories with their own eyes, can get some clear ideas of what it is like to live under settler colonial rule in our age. Many of our Roskilde University students who visit the oPt for the first time – for an internship or fieldwork – usually come back in a total state of shock after having witnessed what Palestinians have to endure on a daily basis in terms of violations to their basic human lives. We therefore hope that this book will serve as a wake up call for young activists wherever they are in the world to continue the work of many well meaning and decent citizens worldwide and ensure that the Palestinian cause is kept well alive and that the global struggle for Palestinian rights will continue unabated.

We also hope that external policy makers, the international NGO community and—importantly—Palestinians themselves read this book, so that a global political imagination develops, which stops the façade of state-building projects in the oPt and instead invests its energies and efforts into establishing pathways that lead to the securement of Palestinian rights and aspirations.

MP & SS: Together with Dr. Ziad Abu Mustafa (PhD from the University of Birmingham in the UK), Michelle is at an advanced stage of negotiations for another co-authored monograph with Routledge on “Understanding the causes of Palestinian Disunity, 1993-2019.”

Moreover, together with Professor Haim Yacobi of UCL (University College London) she is working on a one-year Wellcome Trust project on how power, violence, and health are entangled in conflict zones in general and in Gaza in particular. The project is documenting and critically analyzing the effect of infrastructure demolition on (ill-)health in Gaza, especially in relation to (in)access to health services, (in)access to nutrition, (in)access to clean water, especially drinking water. It aims at nuancing humanitarian interventions and their effects on (ill-)health in Gaza, and at examining the emerging alternative forms of resilience in relation to health among Gaza inhabitants.

What is important for us working on this project are the liminal conditions between life and death in Gaza. Our contention is that there is a necessity to conceptualize the everyday non-life, namely the “not yet arrived” death as a central reality (lived experience) that dictates the daily lives of Gazan people, resulting in the “economy of life and death embedded in (the) Israeli biopolitical and necropolitical regimes of control. We suggest that the spatio-politics of everyday non-life goes beyond necropolitics; it is not simply about the use of social and political power, and the “right to kill”—that dictate how some people may live and how some must die. It is very much about the spatial dimension encompassing non-life: the intentional production of a controlled space, as well as the destruction of it. The conditions in Gaza are not the result of any natural disaster, neither the outcome of the last few months’ events along the border. Rather, we see the Gaza condition within the context of settler colonial political history, ideology, and geography which prioritize territorial and demographic control over basic rights, “the will of erasure”, or at a minimal the “systematic containment” of Gaza inhabitants.

Somdeep is currently working on a project funded by the Independent Research Fund Denmark that explores the spatial design and planning of Israeli settlements and the way they attempt to erase the Palestinian communities in their vicinity. For the project, he conducted ethnographic fieldwork in Palestinian towns and villages, as well as Israeli settlements in the occupied West Bank. Additionally, Somdeep is working on an edited volume with Professor John Collins of St. Lawrence University, that is scheduled to be published on the twentieth anniversary of the 9/11 attacks. Contributions to the volume will explore the manner in which the discourses that were once used to justify the US response to 9/11 have now proliferated across national borders in the long aftermath of the attacks and the launch of the “global war on terrorism”.

Conceptually, the understanding of the PA’s ‘theater of statecraft’ is inspired by Judith Butler’s conception of performativity as one that encompasses several repetitive and ritual performative acts. The authors explore what they refer to as the ‘fuzzy state’ (personified in the form and conduct of the PA) looks like for those living it, from the vantage point of PA institutions, NGOs, international representative offices, and activists. Methodologically, the book adopts an ethnographic approach, by way of interviews and observations in the occupied West Bank and East Jerusalem.