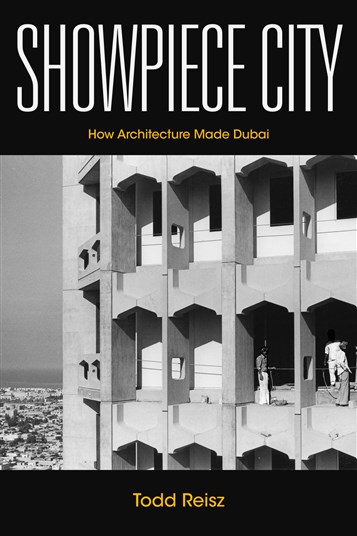 Todd Reisz (TR): This is not the book I intended to write. Originally, I had planned to survey the work of British architect John Harris during key decades of Dubai’s modernization. At the time, photographs from his archives revealed to me the power architecture wields to formulate how a city works and what it provides. Eventually, though, I realized that the source texts I needed about Dubai’s history did not exist yet. It is pretty remarkable how much has been written about the city without much historical documentation to back it up. So I turned to primary sources to help piece together the social and economic forces that brought Harris to Dubai and facilitated his success; to do that required a broader examination of the forces that created the city. Documents at the British National Archives, however limited they are in scope, introduced me to the British Foreign Office’s loose, though explicit, modernization program for the city, which paved the way for British and later more global consultants. English- and Arabic-language newspapers celebrating the feats of these experts made for other, more slippery sources, but they nevertheless provided a sense of the ambitions behind major projects. Reading about the city, putting it together through these papers became a thrilling kind of construction. In the process it seemed that the Harris photographs also started to change; they started to tell me stories different than the ones I thought they were telling.

The result is a history that, by no means comprehensive, focuses on Harris’s work among a shifting constellation of traveling consultants. It was important to show that Harris worked among many others, whether from Dubai or abroad. Rather than writing a book about architecture, I wrote a history through architecture.

TR: This book took twelve years to write, so it feels both previous and current. Its meaning has shifted, and so has mine. When I started writing, I was an architect at the Rotterdam-based firm Office for Metropolitan Architecture (OMA). One day in 2005, I was designing an art museum in Riga; the next day I was working on projects for Dubai. My first time in the city was as a foreign consultant. Ongoing and potential contracts were intriguing to the firm’s business department, but, outside of oil wealth, I had little understanding of what was driving the boom. Within a few months, I was onto answers, but I approached questions not as an historian, but as an architect. I witnessed that what we do as architects can transform a region, both physically on landscapes and expressively in identity and geopolitics. For some architects, this realization induces delirium; for John Harris, it fueled a drive for efficient clarity; for me, it rendered a leaden sense of self-reflection. In light of all those responses, I maintained the architect’s perspective throughout the book. Moving forward from this project, having been shaped by it, I do not know if I would still call myself an architect. If I do not, then there has been a momentous departure, at least for myself.

TR: I would love to see this book on sale in Dubai’s airport gift shops. That does not mean it is just for the foreign consultants flying in and out of the city; it is also for academicians, journalists, and policy makers. I wrote the book that I did not have when I first wanted to know more about Dubai. It is so tempting to look at Dubai and think you get it. The city is designed to be legible, but legibility does not necessarily provide accuracy. There is much more rigor needed in approaching Dubai, because there is a lot to learn from it. In architectural and urban design, for example, the city is a tapestry of late twentieth-century and contemporary approaches to city making. Dubai’s legibility makes this easy to observe, but physical investigation needs to be backed up with other kinds of evidence, some of which this book provides.

More pervasively, there are broadcasted inaccuracies spread about Dubai. Robert Vitalis once claimed that history writing can provide a sort of reverse engineering—a form of analysis that takes apart widely held assumptions without the intention of putting them back together. Dubai seems to exist in an echo chamber that allows observers to hear and experience what they want. There are myths—for example, that its buildings effortlessly rose from the sands. Such a sloppy statement is used by both the city’s promoters and detractors. It can be sung in an Emirates on-flight video, and it makes for a flippant remark in an op-ed piece. Insidious truisms also slip into academic writing. I have worked especially to expose this particular out-of-the-sands myth. Still, more accurate accounts from more varying perspectives of Dubai’s past are needed.

TR: This project leaves me in an existential fix. It defined my work life for the past decade. I wrote it in between design contracts, especially ones that took me to places that helped me better understand Dubai. In the latter years, I taught at design schools in the United States, which gave me access to conferences and the library resources that are cruelly denied to outsiders. There are other books I would like to write, but that would require me to reboot the hustle.

For now, I am writing an article that works as a prequel to the book, and I am organizing an exhibition of archival photographs at Jameel Arts Centre in Dubai. I am completing another book, to be out next year, about Sharjah’s architectural landscape. Sharjah neighbors Dubai, so I thought Showpiece City would have prepared me well enough, but it is turning out to be a very different story. That book is co-edited with Sultan Sooud Al Qassemi. I am anxious to know what comes next. Aerial image of Al Maktoum Hospital fenced in among palm groves in Deira, 1959. The hospital is in the largest fenced area. An adjacent fenced-in compound contains residences for the hospital’s chief doctor and other employees. Courtesy John R. Harris Library.

When John Harris first encountered Al Maktoum Hospital, the fence around it was worth more than its buildings. Ramparts never protected the district of Deira from attack, but a new rigid metal fence, anchored with concrete foundations, enclosed its first hospital. Erected in 1959, the fence served two purposes. Most immediately, it shielded the vacant land around the buildings from others’ claims. Harris recorded in field notes for the town plan that land just beyond the new fencing had been already staked out with palm-frond fences and barasti structures. Even the minimal development of an inadequate hospital had set off a land grab around it. The fence’s second purpose was to designate a discrete and concentrated site for health care. One could point to Al Maktoum Hospital as distinct from the rest of the city. Whereas the hospital’s buildings were deficient and underperforming, the fence enclosed the promise of future fulfillment. Harris was commissioned to design that future, by whom, though, was not clear.

An aerial photograph of the hospital was taken in 1959, the same year Harris visited it for the first time. It can be regarded with marvel—that the region’s hospital, serving a 32,000-square-mile area—was surrounded by nothing. The photograph might betray scant evidence of buildings, but on all sides of the fenced-in hospital are signs of human activity and occupation just as Harris had observed. There are ordering systems. There are houses and fences. Points on the ground surface are date palms planted in Dubai’s first grid formations. The groves did not survive without human care and therefore demonstrated cultivation and enterprise. Had the lens been tilted up a tad toward the horizon, the photographer would have also captured the durable Burj Nahar, Deira’s look-out tower and a marker of the city’s furthest reach. One might wonder whether the tower was cropped out to insinuate isolation. Burj Nahar, built in a similar manner as Dubai’s sturdiest homes, was meant not so much to thwart outsiders as to guide arriving caravans to Sikkat Al Khail, the land entry to Deira and its souks. The tower’s purpose, beyond defensive, was communicative, like an onshore lighthouse. The hospital’s new fence defined, and insulated, the site from the well-trodden passage into the city.

A fence defines space, and it also limits that space. Al Maktoum Hospital’s fence made it possible for the hospital to grow in the coming decade, and it also marked the limits of that growth. Knowing where to set limits mattered not just in terms of area but also in terms of how much health care the city could sustain, in terms of costs and maintenance. Harris’s work on Al Maktoum Hospital filled in the fenced site with an essential expression of the political agency’s modernization campaign—not only in terms of content but also process. After the political agency itself, the hospital was an introduction of a choreographed construction site: formulated schedules, negotiated budgets, computed materials costs (including imported water), and recruited labor. Within fences, experts were supposed to design closed systems of calculation and logistical coordination, defined by the clauses of a contract and within the grasp of a bounded site. There is little that is physically remarkable about Harris’s design for Al Maktoum Hospital; its ordering was the spectacle.

Al Maktoum Hospital signaled Dubai as a legitimate place of welfare and safety. In Dubai, one could be born and one could be healed there, and an administrative logbook could prove it. Throughout the 1950s, however, the hospital had a reputation as a place of last resort, from where the resident doctor “sends all the broken bones and surgeries to Kuwait, Qatar, Bahrain and India.” The hospital’s logbooks charted steady year-to-year progress away from that reputation. Staff affirmed the hospital’s existence by counting every child born, every outpatient treated, and every inpatient lodged. One hundred forty-three people sought treatment there in 1954. By 1957, no fewer than 10,000 people had been treated, and 65 Dubai residents had been born in its barracks. These statistics measured Dubai’s ability to provide healthy envi­ronments and advanced medical advice. Within the clearly marked confines of the hospital grounds, progress was meant to be within reach.

Excerpted from Showpiece City: How Architecture Made Dubai by Todd Reisz, published by Stanford University Press ©2020 by the Board of Trustees of the Leland Stanford Junior University. All Rights Reserved.