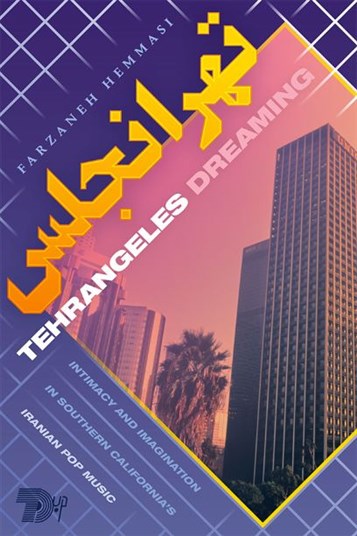 After the 1979 Iranian Revolution and the establishment of the Islamic Republic of Iran, Ayatollah Ruhollah Khomeini banned the public playing, broadcasting or selling of music in Iran, stating that it was sinful. Today genres such as pop, rock, and rap are produced and circulated widely in Iran, but this initial vacuum facilitated the growth of another Iranian music scene, this time within the diaspora. Called “Tehrangeles” by some to signify the large number of Iranians living in the area, Los Angeles became the post-revolutionary center of Iranian pop music from the late 1980s to early 1990s, as exilic musicians and producers filled the cultural void left by Iran’s profound political shift.

Farzaneh Hemmasi’s Tehrangeles Dreaming: Intimacy and Imagination in Southern California’s Iranian Pop Music shows us why we should take the upbeat sounds of Tehrangeles pop music seriously alongside war, revolution, and foreign policy in Iran. By understanding diasporic music production as inherently political, she argues that the longing expressed for Iran by diasporic musicians reflects the political transformations undergone in the country. Through the Tehrangeles music scene, these cultural producers create a sense of intimacy for an imagined homeland among members of the diaspora, as well as a point of transnational connectivity with those still in Iran.

Trained as an ethnomusicologist, Hemmasi divides her interdisciplinary book into three sections that pair years of ethnographic study with close readings of cultural objects—songs, movies, and music videos—to render an expansive look at the transnational terrain of the Tehrangeles pop music industry. The first two chapters deal with the historical and musical roots of Tehrangeles pop after the Iranian Revolution. While the first chapter focuses on the musicality of the upbeat and danceable shesh-o-hasht beat that drives the cultural economy of music production, the second chapter focuses on the archival practices of Iranian exilic cultural producers who built the foundations of the Tehrangeles music scene. Hemmasi’s third chapter then delves into the diasporic implications of Tehrangeles pop reception in the homeland. The final two chapters then analyze the exilic cultural representation of two famous pre-Revolutionary pop figures—Googoosh and Dariush Eghbali—and how they reflect the politicized, diasporic views of Iran. Through close readings of the singer’s songs and music videos, Hemmasi illustrates how Googoosh has been (re)constructed to represent both “victim and beneficiary” of the Pahlavi regime, standing in as the feminine symbol of Iran. Similarly, Dariush’s songs and humanitarian work around drug (ab)use in Iran construct him as a fellow sufferer of the political and social conditions that have plagued the nation.

This book’s study of the Tehrangeles music scene and its transnational connectivities significantly contributes to the emerging field of Iranian diaspora studies through its historical and contemporary engagement with cultural production and its political implications. Much of the work written on the Iranian diaspora in the United States has been focused on that which is overtly political: political activism, US-Iran foreign policy, and memoirs of revolutionary Iran, among others. Hemmasi delves into the culture sphere to show how we can make political meaning from music, and how necessary this music was to narrating the experience of political upheaval and nostalgic longing for a homeland both within and outside of Iran. Moreover, there is a particular importance in researching a topic that—as she has expressed in her monograph—is viewed as trivial. Following Stuart Hall, this monograph is a welcome addition to other scholarship in cultural studies that illustrates how seemingly low-brow culture is pivotal to the political—that it is the terrain upon which political debates are fought. In so doing, she adds a much-needed voice to histories of Iranian culture that wrongly consider such objects unworthy of rigorous study.

Equally as impressive is Hammasi’s ethnographic work in the Southern California area for her understanding of the Tehrangeles pop music scene. By observing and reflecting on the dynamics of Iranian diasporic music scenes—including dance clubs and private parties—and pairing these with interviews of major players in the Tehrangeles music industry, the author was able to uncover the economic and political dynamics of production and reception that reflected different modes of intimacy between the diaspora and the homeland. The auto-ethnographic sections of the work added greatly to laying out the intellectual stakes of the project as well as helping the reader understand how she through her insider-outsider status was able to access certain members and moments of this history. As such, Hemmasi deftly toes the line between honoring her interlocutors while still maintaining her voice and critique.

While this work does much to push the field of Iranian diasporic studies forward in its engagement with diasporic representation and (re)construction, the work could have done more to address the influences of the United States in its discussion of Tehrangeles pop. For instance, in the sections on the pre-Revolutionary underpinnings of Tehrangeles, I would have liked to hear more about the ways in which Western influences made their way to Iran to create musiqi-ye pāp and jāz. Similarly, how did these cultural producers engage with their displacement in Los Angeles—and the United States more broadly—in order to produce records that borrowed from rap and R&B, among other genres? This engagement with the particularity of the United States is only tangentially felt, and would have added an important imperial dimension to how Tehrangeles pop reflects the political stakes of the homeland. Despite this, Hemmasi’s book is an important addition to scholarship that tackles the role of cultural production in the Iranian diaspora, as it ties together interdisciplinary methodologies in uncovering the emergence of an industry that she shows is inherently reflective of the political.