Palestinian Culture and the Nakba 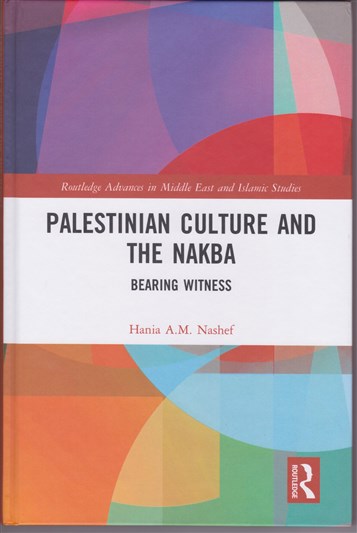 Hania Nashef (HN): I wrote Palestinian Culture and the Nakba to coincide with the seventieth anniversary of the Nakba. Although much has been written about the Nakba, I felt there remained a need to study the cultural manifestation of the catastrophe on Palestinians—whether those living in exile within historic Palestine, or those in the diaspora. Although accounts of the Palestinians’ experience of the expulsion from the land are similar, the emblems that provoke these particular memories differ. In some ways, the homeland and the event are linked to certain mementos, particular memories or objects that assume significance when used to commemorate the homeland. These objects evolve as relics of agency and defiance in the hands of individuals, especially when memory is threatened. My book approaches the subject of the Nakba through a novel perspective. In this book, I look at the icons, narratives, and symbols that have become synonymous with Palestinian identity and culture, emblems that in the absence of the homeland have temporarily replaced the homeland as a source of memory. My approach is interdisciplinary, as I look at different cultural productions, which have become part of the collective memory of the diasporic Palestinian population.

HN: As my approach is interdisciplinary, the topics that the book addresses are wide-ranging. In it, I chose examples (by no means exhaustive) from Palestinian caricature, film, literature (prose and poetry), and painting. I wanted to understand how these works ignite memories of the homeland and help reinforce the diasporic Palestinian identity. I also argued in the work how the creators of these narratives or emblems have themselves become cultural icons within the collective Palestinian recollection.

I chose examples from Palestinian caricature, film, literature (prose and poetry) and painting, to see how these works provoke memories of the homeland and help reinforce the diasporic Palestinian identity. I also argue how the creators of these narratives or emblems have themselves become cultural icons within the collective Palestinian recollection.

In addition, the year 1948 has symptomatically become part of Palestinian identity, and the element that demarcates who the Palestinian is. Palestinian exile and loss have also evolved into cultural symbols that at once help define the person and allow the person to remember the loss. Pierre Nora argues that over time concrete objects, images or even gestures aid memory in taking root. Against marginalization and an overbearing historical discourse of erasure, these “lieux de mémoire” acquire significance beyond the symbolic.

The work also introduces the Nakba as a lived experience, within its magnitude and aftermath, to those who are not familiar with it. Furthermore, the style in which the book is written, and the fact that it narrates the Nakba through cultural productions, makes it accessible to a growing international readership seeking knowledge of the region.

HN: My first book was on the novels of South African/Australian writer, J.M. Coetzee. The Politics of Humiliation in the Novels of J. M. Coetzee addresses issues of universal suffering and inevitable humiliation of the human being and manifestations of them in his work. As one can find parallels between apartheid South Africa and Israel, I would not say that my second book is a complete departure from previous work.

HN: The book is primarily aimed at scholars and researchers in Cultural Studies, Literature, and Media Studies, interested in the Arab region in general and Palestine in particular. It is also of relevance to scholars in Memory and Trauma studies, the significance of both in the formation of the post-trauma individual and in shaping the identity in exile. My book is accessible to readers who are interested in events that have shaped the Arab world in the twentieth and twenty-first centuries, and their specific consequences on the Palestinian people. After reading the book, I hope readers will be more empathetic and understanding towards Palestinians, seeing them as a people on par with others, with a culture and a history that spans generations.

HN: Book wise, I have just begun researching Arab cinema in emerging markets, which I hope will result in a book publication. I have also been researching the influence of Samuel Beckett plays, particularly Waiting for Godot, on Arab theater, literature, and other media productions, especially in times of war, uncertainty, or political upheaval.

J: What were the chapters you most enjoyed writing?

HN: I enjoyed researching and writing all the chapters, but the two chapters in which I felt I learnt the most about the works were chapter one on Naji al-Ali and his creation Hanthala, and the final chapter, which was on Ismail Shammout and his wife Tamam al-Akhal. I have previously written on literature and cinema, so writing about caricature and art was new to me.

During the process of researching and writing the chapter on painting, I was fortunate to meet Ms Tamam al-Akhal who was not only very generous with her time but also eager to talk about her work and share her passion for her art with me. She was an inspiration for me to work on the chapter and understand the importance of her own work along with the work of her late husband, Ismail Shammout, in presenting the Nakba from a Palestinian perspective. Their paintings humanized the Palestinian Nakba and its effect on the people; in their individual works, we saw faces of a people wronged.

My book began with a question of how Palestinians in the diaspora related to the Nakba, given their individual experience of exile. I wanted to understand how they connected to the homeland and whether there were cultural products that they had in common in spite of their experience of exile and method of expulsion. I then began searching for literary icons or cultural products that are shared in spite of the distance that separates the exiles, the internal, and external refugees. Through the writing process, I began to see the connections and how a virtual homeland was being formed in exile.

In my work, I rely on a close analysis and reading of the cultural pro­ductions of six prominent Palestinians, a cartoonist, a film director, a poet, a novelist and two artists, whose works are internationally acclaimed and who are considered major figures in Arabic and Palestinian culture and lit­erature. I discuss the roles these artists and authors have played in forging the Palestinian identity in exile. My choice is by no means exhaustive; many others of the same stature exist. The book is divided into five main chapters, focusing on each artist or author individually.

In my first chapter, “Hanthala: the immortal child,” I examine in detail the work of the late artist Naji al-Ali and his creation, Hanthala. The little boy is now synonymous with Palestine, and stands as a symbol of unyielding defi­ance and a silent observer and chronicler of the struggle of his people and the trodden. The young child, Hanthala, not only refuses to grow up but has also become eternal, surviving his creator through unceasing reproductions of him in popular culture. Hanthala remains as popular and as relevant today as the day he was created by Naji al-Ali.

In the second chapter, “Nazareth: icon of a lost homeland in Elia Suleiman’s film trilogy,” I argue how, through the medium of film, Palestinians have found a space to address the paradox of being an invisible people or present absentees. Elia Suleiman’s films provide them with a space in which they resist marginalization, non-presence, and address the concept of humiliation due to the loss of their homeland. The family of Palestinian director Suleiman, who were able to remain in their hometown, provides an example of an overbear­ing sense of alienation. Suleiman has chosen to contest the marginalization of his people through his silent presence. In the films, the character E.S. (the director who plays himself) observes from the sideline, as he chronicles the events that are unfolding around him. His mute presence develops into an icon for those who wait. In addition, through his portrayal of Nazareth, he renders his hometown the same iconic status, being the Palestinian city that resists negation as it holds on to the remnants of its Arab culture.

My third chapter, “Mahmoud Darwish: the storyteller of Palestine,” looks at the memory triggers of the night of expulsion in 1948 in the works of the late Palestinian poet Mahmoud Darwish. I discuss various accounts of that arduous and painful experience along with the sites of memory that prompt this recollection of loss and exile in his poetic anthology Why Did You Leave the Horse Alone?, while drawing on his prose narratives In the Presence of Absence, and Journal of an Ordinary Grief. The night that is remembered is the night the young child along with his family was exiled, a banishment that disrupted their lives forever. Darwish’s work not only conjures up the experience of loss by repeatedly returning to it in his oeuvre but also the poet metaphorically invokes the memory of his village and a symbolic return to it through his words. His work fills the gap between the various diasporic experiences of Palestinians, elevating the writer to an iconic status, that of the storyteller of his people.

As with Darwish, the Nakba and its consequences pervade the writings of the late Palestinian author Ghassan Kanafani. His novels and short stories have played a significant role in defining how the Palestinian experience was understood after the Nakba. In the fourth chapter, “Ghassan Kanafani: the clock, the orange and what remains of the homeland,” I discuss how the homeland and memories of its loss have been morphed into objects, such as a clock, an orange and a can of lentils, in a number of his short stories. These objects evolve to become triggers of the memory of loss. As with al-Ali and Darwish, Kanafani was born in mandate Palestine and vividly remembers the night of expulsion.

My final chapter, “Ismael Shammout and Tamam al-Akhal: The Exodus and The Odyssey,” argues how the late Palestinian painter Ismail Shammout and his wife Tamam al-Akhal have for years told the Palestinian story through their paintings, which are considered for the most part visual ren­ditions of the trials of their people. Through their art, they have vividly depicted the suffering, struggle and hope of the Palestinians. Their paint­ings provide a visual interpretation of objects and themes that stem from their own memories and have evolved to become part of the collective cul­tural memory of Palestinians of their hometowns. As with al-Ali, Darwish and Kanafani, symbols of Palestine emerge in their work to tell the story of exile, loss and humiliation. In this chapter, I specifically examine their shared project, Palestine: The Exodus and The Odyssey, a collection of murals that narrate the Palestinian saga. In their work, we see how the icons that were portrayed in caricature (Naji al-Ali), and text (Mahmoud Darwish and Ghassan Kanafani), emerge visually through their canvases, construct­ing the Palestinian collective memory. In conclusion, as the year 2018 com­memorates seventy years of the Nakba, I discuss whether these cultural icons remain as powerful as they once were even though the hope for the homeland is diminishing by the day.