Muhammad: Prophet of Peace Amid the Clash of Empires 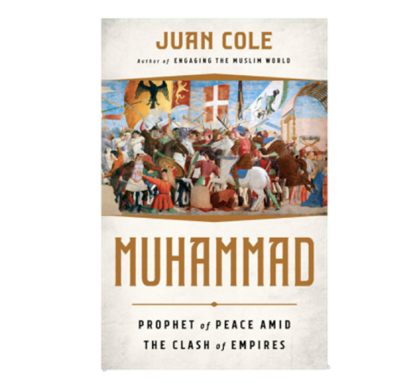 Juan Cole (JC): I had long been struck at the importance of ideas about peace, harmony, tolerance, and reconciliation in the Qur’an, which I studied academically as a graduate student and the study of which has been a big part of my life. I felt that at our historical juncture it was important to lay out a historical argument in that regard, and to challenge the myths that have grown up on all sides. While there is a lot of academic writing on the Qur’an now, it is mostly not very accessible to general readers. I wanted this book to be readable and available, which is why I worked with a trade press.

Since the 11 September 2001 attacks by al-Qa‘ida, I have been beside myself to see the rise both of a virulent sort of Islamophobia in Europe and North America and a series of fringe but threatening extremist movements in the greater Middle East. Both Western Islamophobes and Middle Eastern extremists inaccurately appeal to the text of the Qur’an and to some extent the biography of the Prophet Muhammad (d. 632 A.D.) for support for their hatemongering.

Writing about Muhammad has not been very common in Western universities in recent decades because the field was seized by doubt about what we could know. Most Muslim biographies of the Prophet are late, written beginning 130 years after his death and continuing, in the classical period of Islam, into the ninth century. Doubts had even been cast on how early the Qur’an itself is. Is it like the Gospels, growing up from community memories over time? Because of manuscript discoveries and historical argumentation, the field has largely come around, however, to a conviction that the Qur’an was recited by the Prophet roughly 610-632 (the traditional Muslim dates). I am sanguine that the Qur’an is a primary source for the time of Muhammad, just as the authentic letters of St. Paul are for early Christianity and its Roman context.

JC: I trace the conception of peace through the life of the Prophet chronologically. I look at the Qur’an’s rhetorical appeal for peace as an element in its vision of the next life, and as a way of dealing with harassment and persecution. I also address the question of religious tolerance. I argue that the Qur’an promises heaven to all righteous monotheists—Jews, Christians, and even what some have called pagan monotheists, along with the Muslims.

It has not been common for authors writing about Muhammad and the Qur’an to compare and contrast their themes with those in works of contemporaries. However, I try to bring in Christian, Jewish, and Zoroastrian literature for comparison. I do think the Qur’an shows Muhammad took the side of Christian Rome against the Sasanian Empire of Iran.

I also pay attention to what the Qur’an means by what it says. A lot of the controversies around Islam come from misinterpreting words. For instance, the Qur’an condemns people it calls kafir, who are described as hostile polytheists (in the 620s this group militarily attacked the Prophet and his followers in Medina from the city of Mecca). I argue that kafir never is deployed to refer to Jews or Christians (“people of Scripture” or “People of the Book”) without qualification. It should be translated “pagan,” not “infidel” or “unbeliever,” as it usually is. The Qur’an considers mainstream Jews and Christians to be, like Muslims, heirs of the righteous monotheism of the Patriarch Abraham.

JC: I have written a lot about Islam and Muslim movements, but got drawn by the 1979 Islamic Revolution in Iran into an interest in modern history. Most of my work has concentrated on the period after 1500. So it is a departure for me to go back to the 600s and the very inception of Islam. Still, I co-authored a world history textbook (Global Connections, Cambridge University Press, 2015) and in the course of that work I researched and wrote about the ancient and medieval world. As I said, I was trained in this field as a graduate student and have all along tried to keep up with Islamics, inasmuch as modern movements refer back extensively to scripture and the life of the Prophet. The big departure for me was attempting to put Muhammad’s life in the context of the late Roman Empire and the late Sasanian Empire of Iran, which meant attempting to incorporate the relevant findings of scholars of Late Antiquity (the period roughly 200-700 AD).

JC: I hope the book will have a wide audience among the general public—anyone interested in the origins and nature of Islam, whatever their own religious background.  I wrote it to be read, and to be accessible. It will also prove useful to teachers, policymakers, and anyone who wants better to understand Islam. I would be especially pleased if readers of Muslim heritage found it useful.

JC: I am bringing out a retranslation of the Rubaiyat of Omar Khayyam with I. B. Tauris next year. This Persian poetry was loosely translated by Edward FitzGerald in 1859 and gradually went viral. For most of the twentieth century, it was the most famous poem in the world, widely memorized and cited. Its themes were challenging for a Victorian audience. It questioned the meaning of life and the existence of an afterlife. It advised, given that life is short, that we celebrate it with wine, lovers, and song, but that we live unselfishly even so. My retranslation is accompanied by a historical account of where this poetry came from and how it became popular in the Muslim Middle East. I see it as a form of Muslim secularism.

J: If peace is so central to the Qur’an, what explains the verses about war?

JC: The Prophet’s ministry fell in two epochs: his preaching in his home town of Mecca (610-622), and his exile in the nearby city of Yathrib (known as Medina) in 622-632. I argue that Mecca was a sanctuary of peace as understood by the Arabs, where because of the shrine to God, the Kaaba, it was forbidden to conduct violent feuds or raids, or even hunt animals. In Mecca, the Qur’an instructs the faithful to turn the other cheek and respond by praying for “peace” (or “well-being”) for their enemies, withdrawing graciously.

Once Muhammad and his followers relocated to Medina, the pagans in Mecca decided to come after them to conquer the city, kill or convert the adherents of the new religion, make their women and children captives, and smother the new faith in its cradle. The Qur’an instructs the faithful to defend their community, taking up arms where necessary to repel an invasion. It thus shifts from pacifism to a theory of just war. I argue that its notion of just war is indistinguishable from that of Cicero in the Roman tradition, and not very different from what was argued by church fathers such as Augustine of Hippo and Ambrose of Milan in the Christian Roman Empire after Constantine. The Qur’an only permits defensive battles, however, forbidding an expansionist war of aggression, and insists that that if the Meccan pagans sue for peace, the faithful have to accept an armistice. This position is actually substantially less hawkish than that of the late Augustine. The Qur’an verses permitting and describing these defensive battles have been taken out of context by both Islamophobes and extremists.  For instance, Augustine said that once a battle has been joined, it is legitimate to use tools of deception like ambushes and “fear and compulsion.” The Qur’an says of defending Medina from a Meccan assault at the Battle of Badr (March 624), “Prepare against them whatever you can in the way of force and lines of horse, so as to strike fear into the enemy of God” (The Spoils 8:60). Extremists have incorrectly translated “strike fear” as “terrorize.” The verse is clearly about battlefield tactics, not attacking unarmed civilians, which is forbidden. Islamophobes have also misused this perfectly reasonable instruction for victory in defensive combat to damn Islam, without mentioning that St. Augustine gives the same advice.