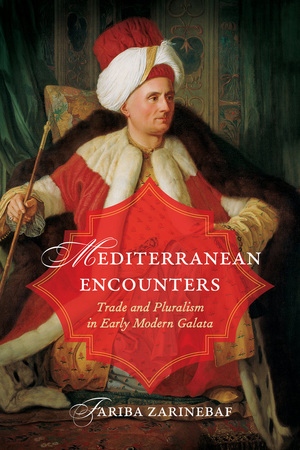 Fariba Zarinebaf (FZ): I have already published a book on crime and punishment in Istanbul in the eighteenth century…

In many ways, this is volume two of the series. The book focuses on the European port of Galata, tracing the layered history of Galata from the Latin conquest to the Ottoman conquest, and the impact of the latter on the society and economy of Galata. I examine continuity and change under Ottoman administration, the policies of Mehmed II toward the Italian city-states, and the impact of international diplomatic and commercial treaties with Italian city-states as well as western European nations on the commerce of this port as well as its cosmopolitan character. The book ends with the impact of the French revolution and Napoleon’s invasion of Egypt in 1798 on the lives of the French community in Galata and the rupture of Franco-Ottoman treaty and diplomatic relations.

FZ: The book addresses the rich literature on Mediterranean historiography, beginning with Henri Pirenne and Fernand Braudel, and places the Ottoman Empire and the port of Galata at the center of this debate. For too long, the Ottoman empire has failed to claim its rightful place in Mediterranean history beyond warfare and religious competition with the West. This book integrates the divided history of Istanbul and the Mediterranean world through the study of commercial, cultural, and legal encounters between the Europeans and Ottomans in Galata prior to the colonial era.

FZ: My previous work on Istanbul focused on the internal history of the city from the perspective of violence and crime in the eighteenth century. This book places Istanbul and its port of Galata on a global network of trade stretching from Tabriz in Iran to Aleppo, Cairo, and Marseille as well as the Atlantic world. It examines the impact of the Atlantic seaboard trade with the West Indies on the Levant, and colonial imports like coffee and sugar on the port of Galata. It provides the prelude to the emergence of French colonial project in North Africa and its impact on Franco-Ottoman relations as well as the French communities in Ottoman ports like Galata. Like my previous book, I use legal records primarily, but I also widen my lens to incorporate Europeans who lived in Galata and traded with the Ottomans into my study. It places the history of a port in Istanbul in a larger historical framework and examines its connectivity to the Black Sea ports as well as Mediterranean ports like Marseille. By focusing on legal records as well as diplomatic correspondence and travel literature, it gives voice to multitudes of Galatans and Europeans, merchants, artisans, ambassadors, dragomans, women, captives and converts, slaves, Muslims and non-Muslims. Crime is but one aspect of this rich and multi-faceted encounter.

FZ: I think in an age of growing nationalism, isolationism, and even racism, this book takes us back to a port city that was described as the Tower of Babel by Lady Mary Montagu, the wife of the English ambassador in the early eighteenth century. Without idealizing this port or this period, I tackle Ottoman “cosmopolitanism” and its limits through the layered history of Galata and its pluralism within the Islamo-Mediterranean legal tradition. I focus on the daily encounters between the European and Ottoman inhabitants of this port through the lens of legal records and petitions by European diplomats and dragomans as well as local residents to find out how everyday conflicts, cohabitation, competition, and collaboration shaped the society of this port in the pre-modern period.

The audience of the book will be scholars, diplomats, and students interested in urban history, international law, international commerce, Ottoman-European relations (particularly with France), pluralism, Mediterranean and Ottoman studies as well as social and legal history.

FZ: I am now working on Ottoman-Iranian relations, the sunni- shi’i conflict and their impact on the Ottoman-Safavid borderland in Azerbaijan in the early modern period. I will continue publishing articles on various aspects of Ottoman-European encounters in Galata and their transformation in the nineteenth century. I also would like to study the transformation of Ottoman identities and the impact of nationalism on ports like Galata.

Excerpt from the Epilogue:

The unraveling of the French Revolution in 1789, the revolutionary wars (1792–1801), and Napoleon’s invasion of Egypt in 1798 had a major impact on Ottoman- French trade and diplomacy as well as on the lives of French communities in Ottoman ports. Although the government of Selim III (1789-1807) initially recognized the French revolutionary government in Paris and continued diplomatic relations with France, Napoleon’s invasion of Egypt in 1798 disrupted this relationship in a profound manner and breached the state of peace between the two states. Moreover, this brief but important occupation was the beginning of French colonial projects in North Africa, although Napoleon was forced as a result of a joint Ottoman-English campaign to evacuate Egypt with his forces within three years. This disruption did not last long, and peace between the two states was eventually restored in 1802 (Treaty of Amiens). But the French Revolution marked the end of a long era of peace, the Ahdname of 1740 and the dissolution of the French Levant Company. In the aftermath of the French Revolution and the subsequent invasion of Egypt a decade or so later, the lives of the French communities in Ottoman ports and cities were disrupted in a serious and violent manner.