Lissa: A Story of Medical Promise, Friendship, and Revolution 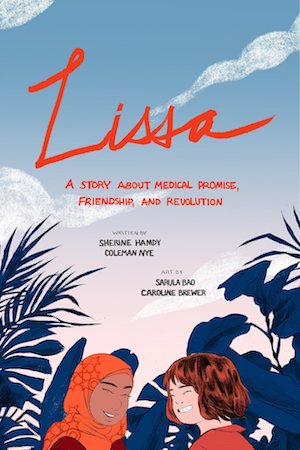 Coleman Nye (CN) and Sherine Hamdy (SH): We were struck by the tensions and affinities between our anthropological projects on the ethical dimensions of medical technologies in two very different settings. Our major dilemma was: how do we make these two worlds—genetics in the United States (Nye) and transplants in Egypt (Hamdy)—converge in a compelling, realistic, and accessible way? We knew we wanted to do it in graphic form. In our teaching, we have both been struck by how the combination of text and image in graphic memoirs can powerfully convey the visceral, temporal, and social dimensions of illness. At the same time, the levity of the genre makes it easier to engage with difficult topics such as cancer (Mom’s Cancer) or political violence (Maus). We ultimately decided to create a fictional narrative in which there were two main characters, each based on our research, whose worlds were deeply intertwined through proximity and friendship, and whose life trajectories reflected the broader medical dilemmas we wanted to explore. Fiction gave us the freedom to craft an absorbing, relatable character-driven narrative, and the flexibility to adapt the narrative in ongoing conversation with the illustrators, Caroline and Sarula, as well as with our interlocutors in Egypt.

CN and SH: While the book is informed by medical anthropology, it exceeds disciplinary boundaries. It explores a range of themes around illness and biotechnology in a global context, but also explores the political, social, and environmental dynamics of suffering and resistance through the lens of the Egyptian revolution. A brief plot synopsis shows how this is all grounded in a story of friendship. Anna is an American grappling with how to manage her genetic risk for breast and ovarian cancer, and Layla is her Egyptian best friend from a very different class and religious background who is dealing with her father’s kidney disease and decisions around organ transplantation. Neither character fully understands the other’s medical situation, which is a source of tension in their relationship. All of this takes place as the 2011 Egyptian Revolution erupts, and both women find themselves reckoning with the broader promises and dangers of enacting a different future through political protest.

CN and SH: What is perhaps unusual about this book is that it is topically and thematically the same as our previous academic research, but it adapts it into graphic narrative form. In this way, it is interesting to read it alongside our other publications because it in some ways rhymes with those works and in other ways gives them greater depth and clarity. For example, in two-page spreads, we visually convey the same anthropological ideas around the social and environmental factors that shape disease that we did in thirty-page academic articles.

This project also allowed for more dynamic, collaborative forms of authorship and citation than in our more conventional work. Lissa not only required us to connect across different languages and perspectives—the academics’ and the artists’—but also allowed us to reconceptualize what counts as knowledge. For example, throughout the book, we visually cite Egypt’s graffiti artists and incorporate real revolutionary actors—including protestors, academics, and doctors—as characters in Lissa as a way to acknowledge their political actions and intellectual contributions to the revolution and to our project.

CN and SH: Honestly, everyone! One of the strengths of the graphic novel format is that it allows for multiple layers of engagement—a middle schooler can read it as a compelling story and learn some things about the Egyptian revolution, a doctor can take away new insights about the social and ethical dimensions of health, or an anthropologist can read this as social theory in-action. Also, the same reader can read it several times and find new things each time. Maybe they start to notice the symbolism of cats or eyes in the book, or they draw unexpected connections to their own experiences.

Sarula Bao (SB) and Caroline Brewer (CB): As illustrators who are not from the same ethnic and cultural background, one of the most important things for us was honoring the Egyptian people and their stories. Ultimately, we hope that we were able to use our art to amplify their voices. The biggest impact that we hope it will have will be as a narrative where people can see themselves, and we think this is particularly important for North African, Southwest Asian, and Muslim girls who might see themselves in Layla’s narrative treated with respect and care.

CB: Since Lissa, I have been developing my own short form comics as well as branching into the realm of interaction design, working on a small team to develop and illustrate a tabletop role-playing game (RPG). While this may feel like a departure from a scholarly graphic novel, many of the skills I developed as a part of Lissa have allowed me to explore issues of accessibility and representation within the context of gameplay. The project’s goal is to create not only extremely engaging and improvisational role playing format, but to explore accessibility from form through function, addressing legibility, language, improvisation and the formation of identity through play that is so often overlooked in more structured RPG game formats such as Dungeons and Dragons.

SB: While I absolutely loved working with Sherine and Coleman and the collaborative work environment of being in a team, I have also been interested in developing my own ideas and stories that are unique to myself. I recently finished a short comic entitled “Real Chinese Food” that I am distributing through various small publishers and businesses. It is a story that specifically deals with my Chinese-American identity and feelings of uncertainty in between two worlds. It uses Chinese food as a device to explore this, with my character loving to eat Chinese American food, but feeling ashamed when her American friends refer to it as unhealthy, trashy, and bad food. This is then contrasted with her Chinese immigrant family who also look down on Chinese American food, contributing to her feeling out of place with Chinese culture at home and not being able to connect to it. Ultimately it continues to end in uncertainty, though finding a point of happiness in specifically Chinese American cuisine. I wanted to talk about the everyday micro-aggressions that can lead to feelings of confusion and prolonged questioning (as is the process in our lives), rather than having direct answers and conclusions to internalized racial conflicts. I am also working on some light-hearted and humorous stories that are a little strange and heavy with visual symbols, but ultimately are about human relationships.

J: What visual tools are unique to Lissa’s telling and how did they help to convey Lissa’s more abstract themes?

SB and CB: One of our first conceptual starting points for the script was to split the visual arch of each character between the two of us. This duality comes into play throughout the book. It is intrinsic to many of the stylistic choices we made around how the girl’s worlds collide and diverge culturally, familially, and politically. Visual and emotional bifurcation work in concert, and the collision of styles and their subsequent withdrawal mirror the girls’ emotional and personal journeys and character arcs. The story starts with both girls co-existing in their own style together in the same pages. However, as they grow up and grow apart, the styles separate until we can only see either Anna through Layla’s eyes, or vice-versa. This was shown by the two of us drawing entire pages and sections individually where the emotional weight was on one of our respective characters, instead of the two of us working on the same page. By the end of the novel, the girls are able to understand each other and respect the other’s choices, and this final connection is illustrated by the two styles merging again, showing their shared world.

Almost every page includes specific decisions regarding objects, tone, layout, composition and lighting, using these elements to better convey the emotional aspects of the story. For example, when Anna and Layla start growing apart from each other—secrets and distrust building all-the-while—we illustrated the contrast by dressing Anna in a dark clothing in light settings and environments, and Layla in light clothes in dark settings. Anna is keeping secret, hence her dark clothing, while the light backgrounds symbolize her knowledge of her truth. Layla’s light clothing shows a relative innocence regarding their friendship and the situation, and her dark backgrounds correspond to Anna’s, as she is in a sense being “kept in the dark.” We also use various symbols and motifs through the story: the cats represent their friendship, eyes represent the “truth,” encompassing the knowledge of the political corruption of the Egyptian government, as well as the dreams and devastation of the revolution. The eye as “truth” is an important part of Anna’s story as well, the shots centered on her evil eye necklace serve as both a link to her home and family in Egypt, as well as a symbol of her journey to discover her genetic history and possibility of a dark future.