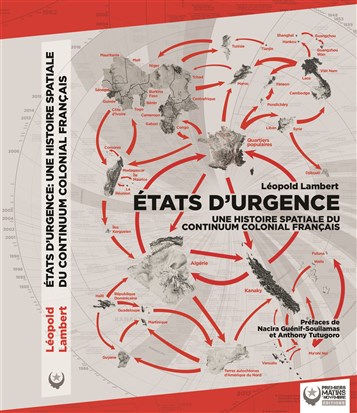 Léopold Lambert (LL): After the 13 November 2015 attacks in Paris, we in France and people in most overseas colonies entered into a regime that not only saw fully armed police officers and soldiers patrolling the streets, but also that facilitated over 5,000 police searches of Muslim homes, offices, restaurants, and mosques, as well as over 750 arbitrary house arrests of Muslim people between 2015 and 2017. This regime felt less like an exceptional measure than an exacerbation of the structural violence we have witnessed for years. I remembered the state of emergency being applied against the banlieue uprising of 2005, when I was still a nineteen-year-old student who had recently moved to Paris. It was also relatively well known that the state of emergency was initiated to (unsuccessfully) crush the Algerian Revolution between 1954 and 1962. There were too few bridges between these three eras being made. This was even more true in relation to two lesser known (in France) applications of this legislation: in 1985 against the Kanak insurrection of 1984-1988 in Kanaky (i.e. the indigenous name of colonial New Caledonia) and in 1987 against the strike of Tahitian dockers who blocked the supplying of the French military nuclear bombing center in Mururoa.

Creating bridges between these different moments was crucial for me, and I wanted to do it in a way that would be useful for the people involved in these political struggles. This is why it took me five years to do the research and write the book. In the context of France, where I wrote it, the part about Kanaky was particularly fundamental for me, since the Kanak political imaginary remains profoundly unknown in France, even in the anti-colonial movement. It is definitely not this book that will change this into depth, but I am hoping that it will humbly contribute to making a few dates, a few organizations, a few political figures and, most importantly, a fragment of the Kanak political cosmology enter our imaginary over here, at the core of the colonial empire.

LL: The book is essentially a historical description of three space-time: the Algerian Revolution, the Kanak insurrection of the 1980s, and the banlieues’ political organizing and revolts from the 1970s to today, particularly since 2005. As the book’s title indicates, I describe these three uprisings through spatial history. This means that I examine how space and the built environment are modified by them and how, in turn, they influence them. Often, architecture is weaponized in order to serve counter-revolutionary purposes: camps, prisons, colonies, massive modernist residential buildings, police stations, and so on. However, although the neighborhoods of colonized people, such as Algiers or Constantine’s casbahs, the Algerian shantytowns of the Paris banlieue, or the Kanak villages are always existing under the threat of police or military raids, their spatiality is instrumental in the way it can provide the conditions of a tenable asymmetrical warfare.

Through the detailed account of these three space-time (to which we can add Tahiti in 1987), I tried to define the concept of a French colonial continuum. This is far from a new concept, and a good number of activists in France use it but, often, it is used exclusively in a temporal dimension, and I thought that it was important to talk about the spatial one as well. This is how the book also mobilizes Viet Nam, West Africa, Guadeloupe, Comoros, Reunion, Guyane, and other colonial geographies at different moments of their histories under French colonial domination. It also looks at how people navigate in this colonial continuum: colonized people, immigrant and undocumented workers, as well as exiles of course, but also the cogs of the empire: militaries, public servants, and politicians. I mapped the careers of a couple of dozens of them; they moved from one colony to another, acquiring counter-revolutionary skills and using them in their next destination which, sometimes is a prefecture with many banlieues in France.

This map is part of several I made for the book to try to associate the text with more graphic documents. There are a certain number of photographs I took in France, Algeria, and Kanaky, but also some maps and a diagram that attempts to show the entire space-time of the book. It is not so easy to read but I believe that if one really dives into it, they can see how all the moments and geographies shown on it are somehow connected. 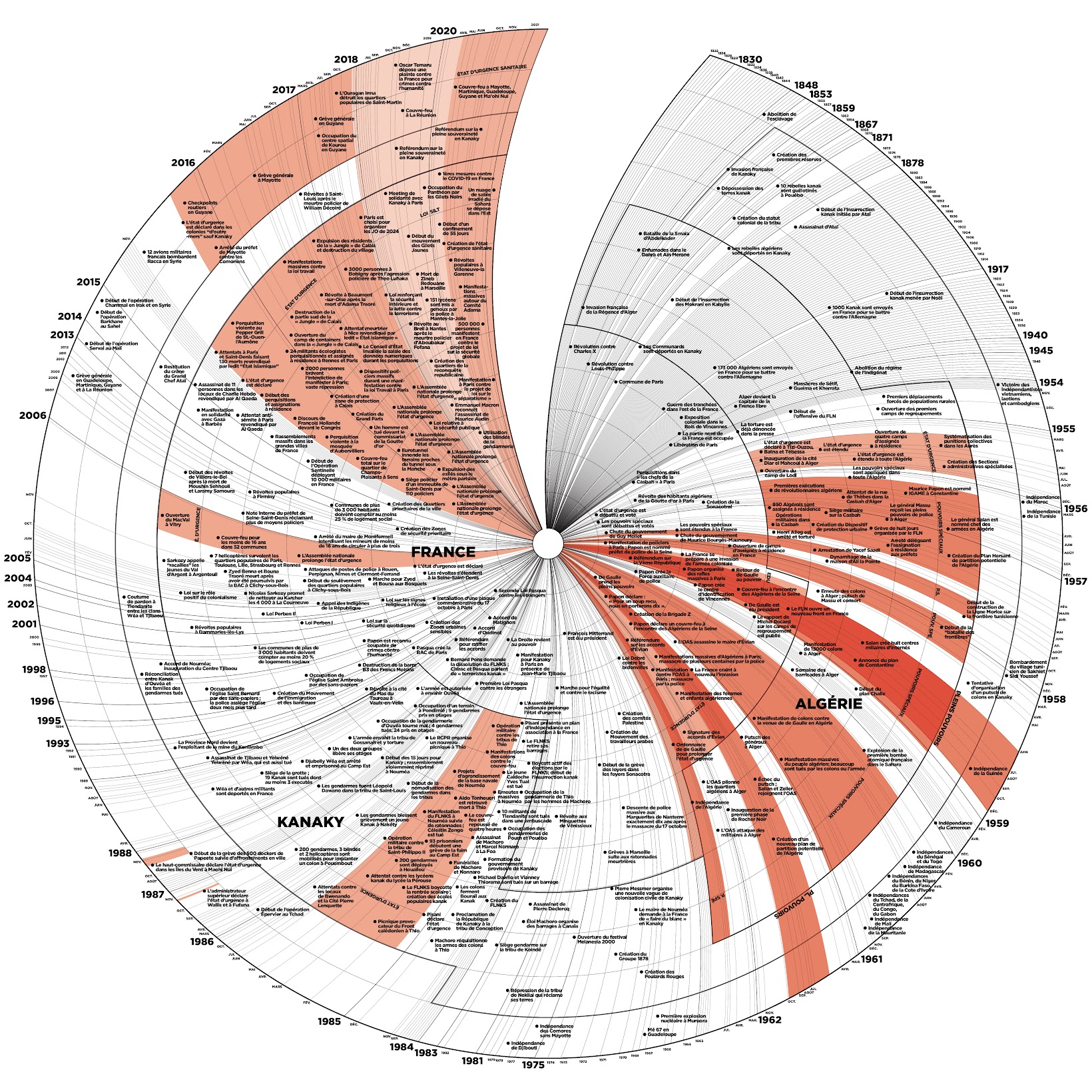 As for the literature, my research led me to three kinds of sources in addition to the many encounters with people—whether here in France, in Algeria, and even more poignantly in Kanaky. The first one was books that have been written on tangential subjects. In this regard, the works of Mathieu Rigouste, Samia Henni, Mogniss H. Abdallah, and Hassina Mechai have been absolutely instrumental, and I am very grateful to them for our conversations.

The second type of source was newspapers from the different eras mobilized by the book. What I like the most about those is that sometimes an incredibly potent quote or detail would be found somewhere in the corner of a page, something that often the journalist probably did not even perceive as crucial. The other thing I find very interesting about newspapers is how they allow one to see the planetary context of each moment one is looking at. For instance, I had never realized that the colonial French officers’ 1961 putsch in Algiers happened when the world was still looking at Cuba and the failed US invasion of the Bay of Pigs. Some connections were more expected such as the concomitance of the last few months of the Kanak insurrection and the beginning of the Palestinian First Intifada…

The third kind of source was the activist publications. The Algerian National Liberation Front’s journal El Moudjahid and the Algerian National Movement’s La Voix du Peuple are references in this matter, but so should be the Kanak publications of Bwenando, L’Avenir Calédonien, or Kanak Immigré. Those bring the embodiment of the struggles in a much more acute way than any French journalist would ever be able to describe.

LL: I am trained as an architect and my work has always consisted of trying to show how space (whether we think of the built environment or geography at large) is instrumental in the enforcement of regimes of domination, in particular that of settler colonialism in Palestine. This book is the least architectural I wrote, and I had to consider the question of time as seriously as the question of space for it but, as its title suggests, the spatial dimension of the French colonial continuum remains crucial.

My work as the editor-in-chief of The Funambulist also consists of cultivating internationalist solidarity between political struggles in the world. The bridges that the book attempts to build between these three space-time are made in the same spirit.

LL: This is a very important question as, for me, this book can only exist if it is somehow useful to the political struggles with which it stands in solidarity. In the context of the Kanak struggle, this means contributing to the re-activation of forms of solidarity between Kanaky and activists in France. In the context of the antiracist movement in France, it can try to tie the struggle to others, and also show the spatial dimension of what we are up against.

LL: I am the editor-in-chief of The Funambulist, which has been my full time job even during these five years of writing this book. I am continuing to edit a new issue every other month around “the politics of space and bodies.” In terms of writing, I have wanted for a while to write a political analysis of a very simple architectural object we take for granted: the key. So, I might try to work on this in relation to settler colonialism, carceralism, and private property in the future.

Excerpt from the book (from the Introduction)