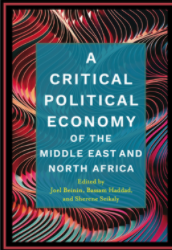 Muriam Davis (MD): I primarily wrote this chapter because there is a real lacuna in the field in terms of work that offers an overview of the political economy of the colonial Maghreb, rather than focusing on individual countries. There are good reasons for this—each country has a rather distinct history of development and colonization—but it also makes it hard to have a general sense of the similarities in how colonialism shaped underdevelopment.

In addition, I saw this chapter as an opportunity to reflect on the ways that colonial mythologies, rather than the cold logic of capital accumulation, actually shaped policy in the nineteenth and early twentieth century. As the work of Jacques Marseille has argued, the interwar period brough significant changes to the political economy of empire, particularly given the interwar economic crisis and the fact that many sectors of the colonial economy stagnated. Yet the question of why France continued to invest money in the Maghreb cannot be answered with an economistic approach. This was even more the case after the one-hundred-year anniversary of the colonization of Algeria was celebrated in 1930, which renewed the popular appeal and nostalgia for empire.

MD: The chapter provides a historical overview of French North Africa from the end of the Ottoman empire to decolonization, and focuses on Algeria’s exceptional place in this configuration, as it was a settler colony and legally comprised of three French departments. This discussion is framed by two main concerns that preoccupied colonial administrators: first of all, a desire to leave behind older models of slave colonies in the Atlantic in favor of the “new imperialism” that was driven by liberal principles; and second, the ways that North Africa might serve as a valve for the pressures building up in mainland France due to the industrial revolution. Despite the temptation to consider North Africa as a distinct geographical unit, these territories were profoundly imbricated in wider questions about the role of capitalist growth and the moral underpinnings of colonialism.

MD: Much of my work looks at how economic planning tried to introduce social transformations among the native population in Algeria rather than merely organizing the distribution of material resources. I have long been interested in how the social sciences—particularly the disciplines of sociology and psychology—played a key role in postwar economic development. My chapter in the edited volume is a reflection of my approach to thinking about development, but it also focuses less on Algeria and instead tries to think about the economic history of the Maghreb more generally.

MD: My chapter is really written to be accessible to undergraduate students, though I hope it will be of interest to other scholars of the region as well.

MD: I am currently finishing a book on how colonial understandings of Islam—and particularly the economic capacities and aptitudes of native Muslims—influenced the economic policies of colonial and post-colonial Algeria. This chapter thus reflects one of my broader arguments about how we should approach economic history, which I see not as a narrow discussion about the ownership and distribution of material resources, but rather a means of understanding how ideas about morality, religion, and even race, shifted over time. The book is under contract with Duke University Press and will be out in 2022.

J: Does this historical discussion have any contemporary resonances? How?

MD: Absolutely—a couple of the things that I have found fascinating are the ways in which economic history has become a hot topic of debate in France, as well as the repercussions it has for questions of colonial memory and even “repentance.” Since the proposed 2005 parliamentary law (never adopted) that advocated the “positive role” of colonization, the question of whether France made or lost money in administering its overseas territories has become a hot button issue. Indeed, we see this tinderbox again setting off sparks in the recent report written by Benjamin Stora, which has come under criticism from many different actors. On the Algerian side, the economic legacy of colonialism—as well as the socialist legacy of Third Worldism, which I also write about in the book—is being renegotiated by the Hirak. In both cases, we see how national identities and historical memory are both profoundly linked to economic orthodoxies. Once again, political economy proves a lens on issues far more complicated than narrowly economistic concerns.

Excerpt from the chapter

Did France obtain economic benefits from her North African colonies? Did capitalist interests play a decisive role in decolonization? These have been major questions in the historiography of the Maghreb over the last two decades, in part inspired by “business history” based on company archives and in part following Jacques Marseille’s postulation of a “divorce” between empire and metropolitan capital after 1930. A detailed, empirically rich concern for the actions of large-scale employers (le patronat, see below), sits uneasily with a second major theme in recent scholarship: a tendency to explain economic policies by “colonial myths,” “colonial ideas,” or other discursive formations that appeal to the mythology of the French civilizing mission. In both cases, scholars largely agree that there was no singular logic of capital that preordained France’s pattern of domination in the region. Economic historians have thus turned their attention to specific industries and interests that won handsome gains from empire while also popularizing the imperial venture in metropolitan France. This highlights both the “relative autonomy” of the French state and its responsibility for managing the contradiction between accumulation and legitimization, even as the historical tensions between nationalism and empire played themselves out in the political economy of the French colonial empire. Recent scholarship on the “history of economic life” in the French colonial empire offers a partial reprieve from the dichotomy, although its call for a “more expansive approach” does not fundamentally question the nature of colonial capitalism, but instead seeks to focus on human actors and draws attention to the social embeddedness of economic activity.

I argue that a narrow focus on empirically based economic history, on the one hand, or on loft notions of imperial grandeur, on the other, make the same fundamental mistake: they fail to account for the colonial political economy as a key site, not only for redistributing material goods and organizing access to the means of production, but also for shaping the moral orders and political subjectivities that buttressed imperial rule. As scholars of the French Revolution have pointed out, the link between economic structures and prevailing notions of virtue and patriotism is hardly unique to French North Africa. Indeed, regimes of capital and regimes of meaning overlap considerably, although their relationship has certain particularities in colonial contexts, especially in cases of intensive settler colonialism like Algeria.

France’s early attempts to gain a foothold in the Maghreb began in the Ottoman period. As North Africa was gradually and unevenly incorporated into Europe’s economic orbit, the concessions granted to European subjects dovetailed with predominant notions of Oriental despotism and the allegedly degenerate economic forms embodied in piracy, environmental degradation, and “white slavery.” Diplomatic and economic penetration were inseparable during the nineteenth century. Over the course of the twentieth century, France wavered between protectionist and more liberal economic policies, a debate that was often entangled with the question of empire. If the British Empire is best known for adopting a liberal policy based on the “imperialism of free trade,” French policy imagine links between economic expansion and possibilities of cultural exchange in non-European territories. This was especially the case under the Second Napoleonic Empire (1852-70), when Saint-Simonian policy advocated more “liberal” methods of colonization.