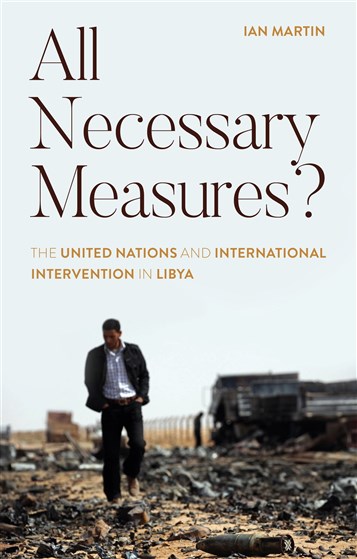 Ian Martin (IM): I wanted to reassess the international intervention in Libya, to ask how it shaped Libya’s subsequent trajectory, and to explore what lessons there might be for international intervention more generally. My own involvement had begun when I became UN Secretary-General Ban Ki-moon’s post-conflict planning adviser on Libya during the military action in 2011, and I had then headed the UN Support Mission in Libya for its first year after the fall of Gaddafi. Since I left Libya in 2012, more information has become available in the writings of participants as well as in more academic studies. I find that many references to 2011 to 2012 miss or distort aspects of the events and the dynamics among the international actors. Revisiting the period from Libya’s February 2011 uprising to its first election in July 2012 provides no easy answers to the urgent question of how the country can recreate a unified state after its latest civil war, nor obvious lessons for future responses to crises elsewhere. But these are better served by a deeper and more nuanced analysis of that period than is found in the often superficial discourse today.

IM: In the book, I ask and offer personal answers to these questions: Was the international intervention in Libya a justified response to an impending massacre and wider threat to civilians, or were other motivations involved in seeking to oust Gaddafi and shape the future of an oil-rich country? What were the dynamics that brought about the resolutions of the UN Security Council, including the authorization of military action? How did NATO act upon that authorization, and did it exceed its mandate to protect civilians by seeking regime change? What role in the military victory of the rebels was played by the secretive special forces operations of bilateral actors, and with what consequences? Was there ever a possibility of a peaceful political transition being brought about by the mediation efforts of the UN, the African Union (AU) or others? How well-informed, or how ignorant, were policymakers about Libya and the regional implications of their decisions? What post-conflict planning was undertaken by the UN and other international actors, and by the Libyans themselves, and how did it play out during the first transitional government? Should and could there have been a major peacekeeping or stabilization mission to provide security during the transition, instead of a “light footprint” of the international community? Was the first national election held too soon? Who should and could have done more to help bring the proliferation of armed groups under government authority, and achieve their integration into state security forces or demobilization? In answering each of these questions, I offer my own reflections on the views I held at the time and my reassessment today.

IM: I have written about the work of UN human rights field operations and peace operations which I led prior to my Libya role, in Haiti, Rwanda, East Timor (now Timor-Leste), and Nepal. My 2001 book, Self-Determination in East Timor: the United Nations, the Ballot and International Intervention, includes an analysis of another major international military intervention mandated by the UN Security Council.

IM: I hope it will be read by Libyans and those still trying to play a constructive role in the future of Libya; by those assessing the difficult issues around past and future humanitarian intervention; and by those interested in how the UN can best shape its peace operations.

To have achieved the greatest possibility of a negotiated transition, the efforts of all those with influence on either side of the conflict would have needed to be more effectively coordinated. The AU, especially in the person of Zuma, had the advantage of access to Gaddafi himself and could most directly tell him he had to step down. The western backers of the NTC—principally France and the UK—could have conditioned their support on its willingness to negotiate with the regime, but they were as determined as the NTC itself that Gaddafi must go and were committed to a path to military victory that left the NTC little incentive to compromise. If they had been more seriously invested in the mediation of Al-Khatib and less dismissive of the AU, their own messages to the parties could have been supportive of a coordinated process. But a mediation adviser who met senior UK officials in late April found no appetite for any initiative that sought to mediate a negotiated settlement with Gaddafi:

According to UK government experts then, defection was the key to success and any attempt to present potential defectors with an alternative diplomatic scenario was counter-productive to the ultimate objective of removing Gaddafi from power … I soon realised that the government’s support of the UN’s mandate to the exclusion of all others was based more on the UN’s inability as opposed to ability to effect reconciliation.

Obama would probably have been more open to a mediated outcome than Sarkozy and Cameron but was letting the Europeans lead. In the absence of a mutually agreed ceasefire, either Gaddafi or NATO could have paused their military action to test the willingness of the other side to talk realistically: neither was willing to do so.

Reflecting on Norway’s efforts, then Foreign Minister Støre accepts not knowing whether Gaddafi would have stepped down or if the rebels would have accepted a deal, but he also says that major western nations were not interested in a negotiated settlement:

I felt that the mindset in London and Paris didn’t have openings for really reflecting on the diplomatic option … Had there been in the international community a willingness to pursue this track with some authority and dedication, I believe there could have been an opening to achieve a less dramatic outcome and avoid the collapse of the Libyan state.

This view is shared from within the AU Commission:

A consensus could have been achieved had the West approached the AU in a more subtle and respectful way … a closer coordination and honest and respectful conversation between the AU and the west would have made it possible to build sufficient international leverage to compel Gaddafi to accept to exit the scene with the required security guarantees for himself and his close associates.

An angry Zuma told the Security Council in September that ‘the AU initiative to ensure a political rather than military solution to the Libyan crisis was deliberately undermined’ despite the decision in Resolution 1973 to support the AU roadmap, and ‘such blatant acts of disregard for regional initiatives have the potential to undermine the confidence that regional organizations have in the United Nations as an impartial and widely respected mediator in conflicts’.

That said, there is reason to doubt that Gaddafi would ever have been willing to give up the real power he wielded—at the same time as he repeatedly said he held no offices to resign from, which added to the mediators’ difficulties in seeking a symbolic stepping aside; let alone that he would have agreed to leave Libya. The tone of his speeches remained defiant and belligerent throughout: there was no moment when he offered an olive branch to his opponents, whom he consistently denounced as ‘traitors’. Those who had been close to him testified to his state of mind: Koussa said from his exile that ‘he knew Qaddafi as well as anyone, and believed in the spring of 2011 that the mercurial Libyan leader was living in his own world, determined to fight to the end’. Libyan officials were said to have admitted after the war that at no time did Gaddafi’s family or inner circle think they would be defeated: they suffered from ‘supreme arrogance and miscalculation’. Sarkozy’s adviser Jean-David Levitte testified, on the basis of French intelligence contacts, that ‘[t]o our knowledge, the colonel never showed the slightest intention to negotiate. We never received a message that he understood what we were saying, that he was thinking about his resignation or that he considered opening negotiations.’

Attitudes within the NTC hardened over the months of fighting. Those whom Al-Khatib met in Tobruk on 21 March seemed open to a negotiated process of reform. There were some intra-Libyan efforts at dialogue with some of those close to Gaddafi. But as more blood was shed, such as in the bitter battle for Misrata, so the pressures not to ‘betray the revolution’ grew, and pent-up hatred of Gaddafi and his decades of repression found its expression. Those who had been reformers inside the system were joined by long-term opponents returning from exile, and Islamist fighters became a major element among the armed groups. Jibril and others who represented the NTC in its external relations had little room to compromise, even if they had wanted to.

The NTC also had legitimate fears about the possible implications of a ceasefire and a transition with Gaddafi still in Libya. A ceasefire might become the basis for de facto division of the country. Gaddafi’s skill in manipulating divisions among Libyans to maintain his dominance over a period of forty years might outwit a rebellion composed of diverse individuals who hardly knew each other, which had had no time to develop strong and united leadership.

The marginalisation that the AU had protested left it feeling bitter as its persistent efforts petered out. It had consistently emphasised that it was Africa that would be the most affected region, exposed to the risks that continued fighting in Libya posed to regional stability and security, as migrant workers, former mercenaries and weapons crossed its borders: Chad’s President Déby could soon say that ‘my fears, alas, were not unfounded’. It also found its motives caricatured by those who alleged that it sought to protect Gaddafi and his regime, perhaps because of his past largesse to some African states and leaders. In fact, Gaddafi’s behaviour in Africa had left him few friends. Moreover, as Ping maintained, the AU had reacted creatively to the uprisings in Tunisia and Egypt, basing its response not on a dogmatic interpretation of its rejection of unconstitutional changes of government but ‘on the need to contribute to the attainment of the overall AU objective of consolidating democracy in the continent’. From the very start, it made clear that any solution to the Libyan crisis had to be based on the fulfilment of the legitimate aspirations of the Libyan people for democracy, respect for human rights and good governance. In striving to secure a Libyan consensus on inclusive transitional institutions until elections were held, it ‘clearly implied Colonel Qaddafi’s relinquishing power to those institutions’. But it resented those outside the region declaring publicly that an African head of state must step down.

However, those who claimed a lead for Africa in the Libyan crisis perhaps did not sufficiently recognise that Libya did not identify itself only as an African country: its Arab identity was at least as strong. Many Libyans resented the way Gaddafi had squandered their country’s resources on his African ambitions; together with Gaddafi’s use of mercenaries from sub-Saharan Africa, this contributed to Libyan racism towards black Africans, of which there were many victims in 2011. In his reflection, Ping deplored the reluctance of some members of the international community to fully acknowledge the AU’s role and said that lasting peace on the continent could only be achieved if efforts to that end were based on the full involvement of Africa and a recognition of its leadership role. But the circumstances of Libya in 2011 suggest that what was needed was a complementarity of UN and AU efforts, with consistent support from all actors. While this too might have failed, foundering on Gaddafi’s extreme obduracy and the virulence of the hatred he had engendered among many Libyans, it was far from what was tried.