Jadaliyya’s managing editor, Kylie Broderick, interviews Arash Davari and Sina Rahmani on their article, “Divorce, Iran-America Style“. In it, Arash and Sina talk about the historical evolution of the relationship between Iran and America, recent tensions between the two states, and why Iran occupies a unique position in the mindset of American politics.

Their article can be found here: https://www.jadaliyya.com/Details/38779/Divorce,-Iran-America-Style

Arash Davari is assistant professor of politics at Whitman College. His research and teaching interests include modern political theory; history and theory; aesthetics and politics; postcolonial political theory; and state formation and social change in the Middle East, with a focus on modern Iran. He holds a Ph.D. in Political Science from the University of California, Los Angeles.

Sina Rahmani is the creator of “The East is a Podcast”. He completed his Ph.D. in Comparative Literature at UCLA. He is a translator, scholar, and writer. His work has been published in the PMLA, Iranian Studies, boundary 2, Radical History Review, and Public Books.

This article is part of the new Jadaliyya Iran Page launch. To inaugurate the Iran Page, its co-editors are pleased to present the following articles, interviews, and resources:

“The Systemic Problem of ‘Iran Expertise’ in Washington” by Negar Razavi

Houri Berberian, Roving Revolutionaries: Armenians and the Connected Revolutions in the Russian, Iranian, and Ottoman Worlds

Nile Green, The Persianate World: The Frontiers of a Eurasian Lingua Franca

Eskandar Sadeghi-Boroujerdi, Revolution and its Discontents: Political Thought and Reform in Iran

A Profile on the Arab Council for the Social Sciences: A Conversation with Seteney Shami

‘MESPI Talks’: A Conversation with Katy Whiting of the Sijal Institute on Arabic Education in Amman 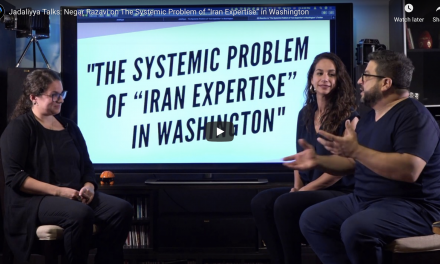 Jadaliyya Talks: Negar Razavi on The Systemic Problem of “Iran Expertise” in Washington