In 1964 Samir Amin lamented that, “Nothing serious has been published in any foreign language on Egyptian trade unionism.”[1] He could have added that the same was the case for most of the Middle East and North Africa. Neither was there very much in Arabic, except for the Nasserist school of Egyptian labor history and its Marxisant variant. The region came late to the “new social history” stimulated by works like E.P. Thompson’s The Making of the English Working Class (1963). The first English-language works to apply class analysis to any Middle Eastern country paved the way for subsequent studies of labor.

Hanna Batatu, The Old Social Classes and The Revolutionary Movements of Iraq: A Study of Iraq’s Old Landed and Commercial Classes and of its Communists, Ba‘thists and Free Officers (Princeton: Princeton University Press, 1978).

As the title suggests, Batatu’s magnum opus, is far more than a labor history. Book One expands on his Harvard Ph.D. thesis, “The Shaykh and the Peasant in Iraq, 1917-58.” Book Two and much of Book Three are devoted to the Communist Party of Iraq. The CPI was the largest in the Arab world and the only Iraqi party with a national scope, incorporating members from all of Iraq’s ethnic and religious communities. The party built important social bases among the railway and Basra port workers and students, but was much less successful among the peasant majority.

Like Batatu, Abrahamian deploys a combination of political and social history to understanding Iran from the 1905 Constitutional revolution to the 1979 revolution, which culminated in the ascendancy of Ayatollah Khomeini and the formation of the Islamic Republic. Abrahamian also allots considerable attention to the Tudeh Party, the local communist party. From its establishment in 1941 until the wave of repression that followed the 1953 coup carried out by the CIA and MI6, the Tudeh was the largest party in Iran. It had significant support among mill and oil workers, wage-workers in the bazaars, and national minorities. But the majority of its leaders and members were from among the educated middle classes, and it made little headway among peasants.

The publication of Batatu and Abrahamian’s books, as well as Eric Davis’s Challenging Colonialism: Bank Misr and Egyptian Industrialization, 1920-1941 (Princeton: Princeton University Press, 1982), which extends the use of class analysis to the emergent Egyptian industrial bourgeoisie, secured the intellectual authority of tenured scholars and the imprimatur of Princeton University Press and encouraged younger scholars interested in Middle East labor studies. The most widely read books of that wave are:

Lockman’s edited volume sought to establish labor history as a central subfield of Middle East Studies. It featured chapters by most of the younger scholars who emerged in the 1980s and early 1990s: Feroz Ahmed (on Turkey), Assef Bayat (on Iran), Donald Quatert (on the Ottoman Empire) and Selma Botman, Ellis Goldberg, Kristin Koptiuch, and Marsha Pripstein Posusney (all on Egypt). It also included chapters by Lockman and myself offering auto-critiques of Workers on the Nile. Our contributions and some of the book’s other chapters were influenced by post-structuralist theory and discourse analysis. This was certainly not our intent; but ultimately, overzealous deconstruction of everything and skepticism about any form of materialism rendered the study of labor or any form of scholarship engaging the category of class unfashionable. Consequently, few new scholars entered the field in the 1990s and 2000s. Among them were:

John Chalcraft, The Invisible Cage: Syrian Migrant Workers in Lebanon (Stanford, CA: Stanford University Press, 2009). This title is featured rather than Chalcraft’s earlier The Striking Cabbies of Cairo and Other Stories: Crafts and Guilds in Egypt, 1863-1914 for the sake of geographical diversity.

The state of field of Middle East labor (and peasant) studies at the end of the 20th century was surveyed in:

Three significant orientations have emerged since then. The first is the deepening of Ottoman labor history. In 2001 the late Donald Quataert curated a special section of International Labor and Working-Class History on “Labor History in the Ottoman Middle East, 1700-1922.” His own contribution to that issue (with Yüksel Duman) was the translation and edition of the memoir of a late-Ottoman era coal miner, Ethem Çavuș, which doubled the number of autobiographies by Middle Eastern workers then known to scholars (The other is Fikri al-Khuli’s al-Rihla recounting of his experiences as a textile worker in the early days of the Misr Spinning and Weaving complex at Mahalla al-Kubra, Egypt.) The capstone of Quataert’s career is:

Quataert demonstrates that the distinctions between workers and peasants as well as between free and semi-free labor were not fixed. Peasants from more than 300 villages in the coal mining region were conscripted to work twelve-day shifts in more than 100 different mines along with military labor and, later, wage workers

A second orientation is a much more fully gendered study of labor, best represented by:

Hammad examines both hand loom weavers and the workers at the mechanized Misr Spinning and Weaving complex in al-Mahalla al-Kubra. She uses an array of court and company documents, petitions, and central state reports to sustain her focus on the local forces struggling over a wide range of social, cultural, economic, and political issues in the formation of a newly industrializing gendered urban environment. The scope of Industrial Sexualityincludes the gendered workplace in both manual and mechanical spinning and weaving, the intermediary roles of shop floor foremen, masculinity and urban violence, entrepreneurial women who rented rooms to male factory workers migrating from surrounding peasant villages, sexual harassment, homosexuality, child labor, child molestation, prostitution, and more.

Recent anthropological work on women textile workers in the neoliberal era also feature gender relations. But their ethnographic method entails a concentrated focus on workplaces in contrast to Hammad’s broader urban history approach. These books are especially notable because the authors actually worked alongside their subjects in factories, as Samer Shehata (see above) did a decade earlier.

A third orientation is the globalization of labor history, which quite naturally is especially concerned with migrant workers in the oil-rich Persian Gulf countries. Andrea Wright’s unpublished doctoral thesis is notable in this category.

Finally, the role of workers in the Arab uprisings of 2011 and working-class collective action in the decade or more preceding the uprisings (especially in Tunisia and Egypt, but there is room for work on Morocco and Bahrain), attracted the attention of both younger scholars whose doctoral dissertations are still unpublished and senior scholars. Among the more important unpublished dissertations are:

And the work of more senior scholars: 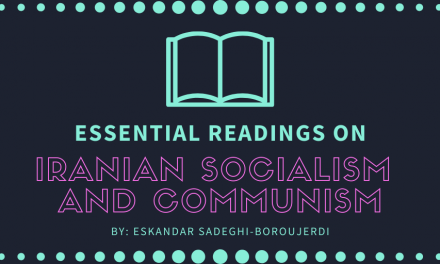 Essential Readings on Iranian Socialism and Communism (by Eskandar Sadeghi-Boroujerdi)