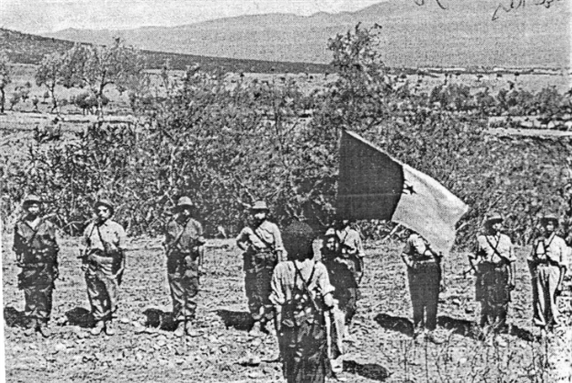 [This is one of six pieces in Jadaliyya`s electronic roundtable on the anniversary of the Algerian Revolution. Moderated by Muriam Haleh Davis, it features contributions from Ed McAllister, James McDougall, Malika Rahal, Natalya Vince, Samuel Everett, and Thomas Serres.]

This contribution is a summary of some of the ideas that I explore in my monograph forthcoming with Manchester University Press: Our Fighting Sisters: Nation, Memory and Gender in Algeria, 1954-2012.

“After the War, I Did Nothing”

This statement – or variations on it – was one of the most common reactions I got when I asked Algerian women, and in particular rural women, who had participated in the liberation struggle 1954-62 what they did after independence. Interviewees would talk for hours about what they did during the war – they would tell me that they could talk for days and weeks about it – and when I got to 1962, they would look at me, almost quizzically – why do you want to know about that? This view of 1962 as “the end” and more specifically “the end” for women dovetails with the prevailing view in existing historical research on what happened to women who participated in the war – they were “sent back into the kitchen” by a patriarchal and oppressive regime which failed to recognize their contribution to the nationalist movement.

In my research, I seek to unpack the ways in which the events of 1962 are expressed in a highly metaphorical language, or indeed are subject to strategic silences, and at the same time understand how these metaphorical meanings also co-exist alongside the recounting of lived experiences which do not neatly fit the codified, politicized narratives of these metaphors. This is important for two reasons. Firstly, it enables us to challenge the way in which post-1962 history has tended to be written in a binary language of moral judgment: depending on one’s political position, independence either saw the dreams of the anti-colonial struggle fulfilled, or cruelly betrayed. Secondly, the way in which this binary language co-exists alongside the “messiness” of lived experience is highly suggestive of the ways in which the Algerian state and society began to be constructed after 1962.

Tents, Clothes and Macho Men: The Language of the Winners and Losers of Independence

When the women I interviewed talk about 1962, they are positioning themselves within a dominant narrative about who were the “winners” and who were the “losers” of independence. They do this not explicitly, but through a coded language of tents versus villas, ragged uniforms versus smart clothes, and egalitarian versus misogynistic men. After July 1962 “true” soldiers, that is to say, men and women who risked their lives on Algerian soil throughout the seven and a half year struggle (and the women I interviewed would include themselves in this category) were housed in tents to replace homes destroyed by the French army. In the meantime, “false” soldiers (whom we might surmise are the last-minute deserters from the French army, or members of the “army of the exterior,” waiting the war out on the Tunisian and Moroccan borders) quickly appropriated the villas left by the departing French settlers for themselves. “True” soldiers wore ragged military fatigues and ill-fitting shoes, whilst “false” soldiers had smart new uniforms and awkwardly held shiny guns. “True” soldiers treated women who had participated in the war with respect and consideration, whilst “false” soldiers kicked real female veterans out of political meetings, sought to marry them off and threatened them with rape. (Il)legitimacy is both material and moral.

These depictions of real and false soldiers echo a widely disseminated counter-narrative to the top-down official discourse on independence, one that cuts across gender, geography, age and social class in Algerian society. This is a narrative of revolution confiscated, which puts into play a set of dichotomies familiar to all Algerians – true/false mujahidin, insiders/outsiders, authentic/foreign rulers and legitimate/illegitimate power. In its most politicized form, the term “Oujda clan” – taking the name from the Moroccan town ten kilometers from the Algerian border where the Etat Major Général (EMG, army general staff) was based – evokes a powerful politico-military faction within the FLN, including current president Abdelaziz Bouteflika, which snatched power and prosperity for themselves in 1962.

Yet at the same time, interviewees’ accounts also reveal the uncertainty of 1962: their stories reveal that not everyone who got a villa was a false veteran, true veterans could also be misogynistic and one interviewee’s statement that “I never saw my brothers from the rural guerrilla again” is belied later in her account when she does, in fact, meet a former member of her guerrilla unit who helps her get a job. These more nuanced, and sometimes contradictory, lived experiences co-exist alongside a language of absolutes when attributing moral meaning.

Using the Emotional to Avoid the Political

The pejorative popular connotations of passing part of the war in Tunisia and Morocco makes it a particularly uncomfortable subject for women who spent some time on the borders, even if it was only for a short period of time. A common trajectory for women who had been arrested in the Algiers bomb network or in the rural guerrilla was for them to be imprisoned in Algerian prisons, and then transferred to French prisons. These women were then released as a result of the signing of the Evian peace accords in March 1962. However, due to ongoing violence in Algeria, it was considered too dangerous for them to return immediately, so many spent at least a few weeks with the FLN-ALN on the Moroccan-Tunisian borders.

This is an sensitive topic – women talk about feeling uncomfortable in their comfortable accommodation, they are very vague about the political wrangling and in-fighting going on around them, they indicate that when they were approached to join an (unspecified) faction they refused. Mainly, they talk about being lost, exhausted, confused and desperate to go home. Interviewees evoke what it felt like to win independence but lose loved ones, the sense of being emptied of everything they had to give, of seeking out a normality which had been irrevocably transformed, yearning for a return which was impossible.

At the same time, these narratives are constructed in the post-hoc knowledge of the existence of post-1962 discourses about “the interior” and “the exterior,” the “Oujda clan” and “stolen independences.” In this context, personal narratives of being tired, fed up, and homesick become a political necessity. They simultaneously bear an unspoken or semi-spoken narrative of (personal) legitimacy and integrity, i.e. “I was not part of a clan which benefited politically or economically from independence and I am a real mujahida who fought on Algerian soil.” Yet this narrative necessarily remains unspoken. To say these words aloud would be a powerful and potentially dangerous act, because one would have to assume its political and social implications – excluding “others” and menacing the idea of the war as kind of social glue, the foundation of Algerian society. Using this coded language allows individuals to position themselves politically as outside the winning faction without undermining the social significance of the war.

Back into the Kitchen?

The idea that “nothing happened” after 1962, that “things went back to how they were before,” or indeed that “women were betrayed” are elements of many interviewees’ accounts. To provide some basic contextual background to this: independence offered significant opportunities to the very small minority of women (around five percent) who received a formal education under colonial rule. With the departure of the settler population, their skills were desperately needed by the new Algerian state. Interviewees who fell into this category became medical professionals, teachers, journalists, worked in government ministries, and in a few cases held political offices. Even women who refer to the EMG’s seizure of power in 1962 as a “coup d’état” underline that after 1962 they felt a responsibility to the state, if not the political system – to “make things work” and participate in what were called “tasks of national edification.”

For the majority of women who had not been formally educated (about ninety-five percent), as for the majority of men without formal education (about ninety percent), the post-independence opportunities were much more limited: men and women in this category were much more likely to return to their previous roles. But it is important to underline that the context for these “returns” had dramatically changed, largely as a result of the upheavals of war: in many villages women outnumbered men (as a result of war deaths or men migrating to look for work), whole families migrated from rural to urban areas on a significant scale, and many women acquired a source of independent income for the first time: the war widow’s pension. If rural interviewees without access to formal education talk about pensions so much, it is not only because they were and are financially important to their communities, it is also because this a way of talking about their relationship to the state, and whether or not these women feel that the state has sufficiently recognized the sacrifices of these women for the nation and reimbursed its “blood debt.”

The Relationship to the State and Narratives of the Nation

When we seek to cross the colonial/ post-colonial divide, we uncover a history of continuity and change that has been buried under fifty years of post-hoc state self-justification and the rankling resentment of many Algerians who consider the revolution betrayed. The conflictual and potentially problematic nature of 1962 as symbol of political (il)legitimacy and signpost signaling one’s relationship to power then and now is expressed by interviewees in a number of ways: through an emphasis on their apoliticism, through the metaphor of moral corruption, and through the insistence on being useful citizens, despite everything.

This provides a shared language that brings people together, a “safe space” for political debate that never undermines the social importance of the war and the hegemonic narrative that there was “one sole hero, the people.” In this perspective, the splits and divisions of 1962 become part of the dominant, if not the official, narrative.

The year 1962 is also important in re-defining interviewees relationship to the state. Listening carefully to how interviewees talk about independence, we begin to understand that if familial structures and social expectations of women’s roles proved resistant to change, independence nevertheless meant a redefinition of the relationship between the individual and the state which affected women and men. For many women who had participated in the war, 1962 barely registered as a tremor on their day-to-day lives because it had an imperceptible effect on engrained conceptions of the place of women within family and society. Yet at the same time it indicated a seismic shift in shaping the way in which they would view their relationship to the state. From the colonial power to whom nothing was owed and of whom nothing was expected, the post-independence state was meant to fulfill its citizens’ hopes, and at the same time, citizens now had a moral obligation to contribute to state-building. This is a shifting and unwritten social contract, but a social contract nevertheless. 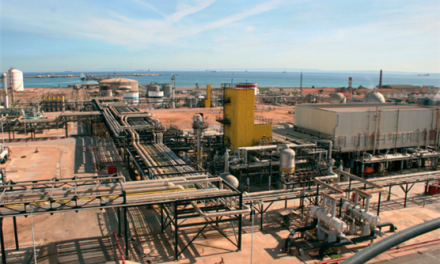 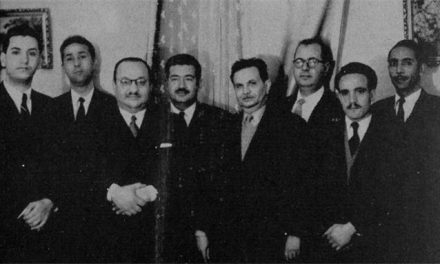 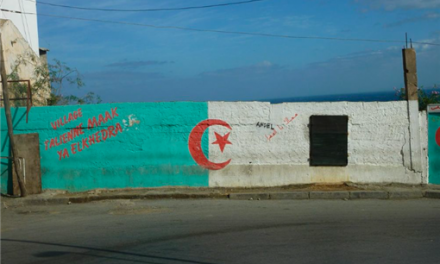 Roundtable Introduction: The Afterlives of the Algerian Revolution 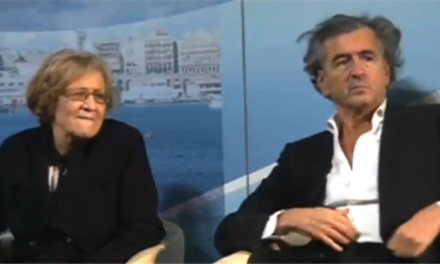