The Persistence of Orientalism 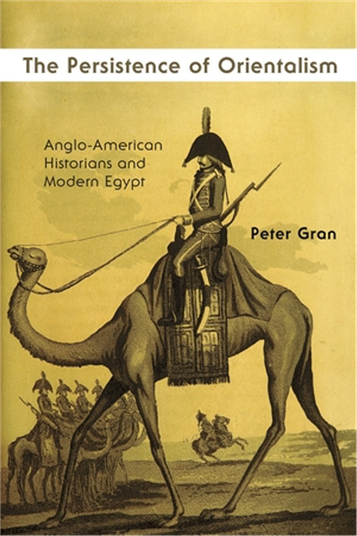 Peter Gran (PG): From the beginning of my career in the 1970s, until I began researching for this book in more recent times, I could not understand why readers treated my previous book, Islamic Roots of Capitalism (1976) with such suspicion. It seemed obvious to me that most countries have been shown to have early modern roots of their own modern history. An eighteenth-century enlightenment can be found in many countries. Why, then, have I faced—and still face—such problems in the United States and the United Kingdom with my argument that these developments could be found in Egypt as well? I also found it hard to understand that often the most extreme critics were those who well knew Al-Zabidi’s dictionary or Al-Jabarti’s history. It was also puzzling that most scholars never address the issue of the field’s paradigm whatsoever.

Finally, I came to the hypothesis that the explanation for this lay in the function of the field. The function of the field was to protect a piece of Western identity, the idea of Egypt as a stagnant oriental despotism awoken by Napoleon in 1798. Maintaining 1798 as a watershed was not a worshipping of Napoleon but rather a way of maintaining the image of authentic Egypt as that of the Egypt of Exodus in the Bible, a country that had become stagnant after God’s people had departed. It is not that scholars today are particularly religious, but rather that the general story of Exodus is necessary for Western identity. As I worked this part of the argument out, it became clear to me that I had arrived at an explanation as to why my own book had been received in this way. I was in a gate-keeper field, one that existed to defend being a Westerner, a defense which was needed given how many innocent lives had been lost in the so-called rise of the West.

In preserving Egypt as the Egypt of Exodus, the field had preserved a certain kind of justification for what our ancestors had done. Of course, there were collateral deaths when it came to the New World, but as the field of Egyptian studies shows, God brought about many collateral deaths by drowning Egyptian soldiers in the Red Sea. Islamic Roots of Capitalism raised a few questions about the supposed stagnation of a supposedly oriental country, and the reaction followed accordingly.

PG: Much of the book is addressed to the specialist on Egyptian history, although the wider argument is equally addressed to general readers in American studies, those concerned with what is holding white supremacy in place, and those who were drawn to Edward Said’s critique of the idea of the Orient.

PG: I see the book more as a continuation than as a departure from earlier work. Earlier on, having encountered a reluctance from colleagues to abandon the oriental despotism model after I published Islamic Roots, I decided to spell out the dominant kinds of ruler-ruled relations in the modern world, in order to show how Egypt could be resituated on other bases.

As I progressed, I realized that I had too much material on Egypt for a general book about types of hegemonies. So, I turned to the study of other countries, planning to come back to write a book about Egypt based on one part of this book. When my previous book, Beyond Eurocentrism: A New View of Modern World History (1996), appeared, one very useful commentator asked why the metanarrative of world history was not better spelled out. This inspired me to write The Rise of the Rich: A New View of Modern World History (2009). In this book, I introduced the idea of the collusion of dominant elements in the core and periphery of the world market. And I asked questions around why we are still trying to maintain the model of the rise of the West, particular since the rise of China. This led me to approach the problem in The Persistence of Orientalism, not as criticism of particular scholarly works, but rather as a general reflection on the costs of maintaining an identity based on Hegel’s model of the rise of the West, the stagnation of the Orient, and of people without history.

PG: I hope colleagues in modern Egyptian studies will read it. I hope the argument about this field as a gate-keeper field will mean something to people marginalized by the rise of the West and the Euro-American storyline about who we are, as Americans. I would like to see our field move in this direction, and away from gatekeeping.

PG: I am currently working on a book that compares Egyptian and Italian history. It is tentatively titled Egypt as Italian Road.

Excerpt from the book (from the Preface)

The book began simply from the observa­tion that this was a field about which little had been written—a field that had had few debates, but more than its share of lore. My sense was that probably the two points were related.

I approached the subject with rather conventional assumptions, which, as the work progressed, I discovered were not all that sus­tainable. Among them was that, in a scientific sense, the field began after World War II, following the creation of institutions such as the Middle East centers, and that what came before was a body of colonial and missionary writings that might on occasion be of some interest but were not scientific, with the exception of the early work by the French savants at the time of the Napoleonic conquest. What I dis­covered undermined my confidence in those assumptions to a consid­erable degree. What I found was that it was British colonial writings on Egypt that provided the framework for much of what was writ­ten before today; it was missionary writing on Islam, some of which was American, that provided the foundation for the contemporary Anglo-American study of Islamic society. The two together in effect gave substance to the paradigm of Egypt as an Oriental despotism, the paradigm that continues to underlie modern scholarship. For this and other reasons, I wound up beginning the work at an earlier period than expected, looking at the actual nature of the field—again, contrary to expectations—as Anglo-American, rather than as strictly American.