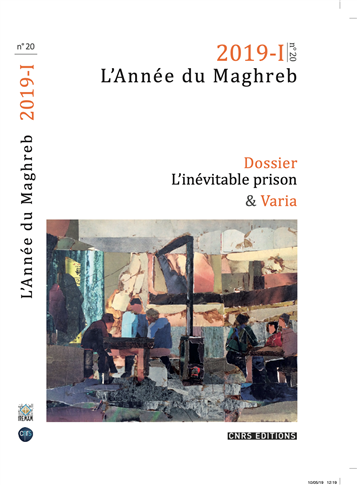 Jadaliyya (J): What made you compile this special issue?

Marc André (MA) and Susan Slyomovics (SS): We met in Lyon, France in 2013, introduced by Frédéric Abécassis, a historian of the Maghreb at the École Normal Supérieure de Lyon (ENS). We were both researching Algerians in prison across history, anthropology, and geography. From 2013-14, Susan was a visiting fellow at the Collegium de Lyon, then housed at ENS, and Marc was teaching in Lyon. In 2017, Marc was a visiting scholar at UCLA’s Center for Near Eastern Studies, where Susan served as director. These academic exchanges insured our steady collaboration in person, since virtual communications seem only to work once we have had a chance to discuss at length. We each had begun oral history projects with former political prisoners during the Algerian War of Independence, which became our respective articles for the special issue: Marc on a French war resister (“Prison Experiences and Pictorial Translations: The Testimony of Painter and Conscientious Objector Didier Poiraud during and after the Algerian War of Independence, 1961-1964”) and Susan on her eighty-six-year-old brother-in-law’s detention during the war (“Sites of ‘Illegal Detention’: The Algerian Camp Paul-Cazelles and Hocine Kahouadji, FLN Militant”). Through our call for papers, widely disseminated, we wanted to bring together our different disciplines of anthropology and history while assembling a variety of scholars working on the topic of prison and military justice in the Maghreb in French, English, and Arabic—although the majority of contributions were in French and about Algeria.

J:  What particular topics, issues, and literatures does the volume address?

MA & SS: Marc’s recent book concerns Algerians incarcerated in French prisons in Lyon. An extraordinary statistic he discovered, for example, is that in 1957, some eighty percent of Algerians passed within the prison walls—including overnight stays, street sweeps and round-ups (rafles in French)—amounting to thirteen thousand people who came under some form of French carceral control, often resulting in consequential files and records. Imprisonment ranged from a night in prison to the maximum penalty of the guillotine, still in use in France throughout the Algerian War of Independence. Susan’s recent publications are concerned with prison, human rights, and heritage memorialization of so-called “difficult sites” of repression in the MENA region. She has researched and written about Morocco’s Truth and Reconciliation Commission, World War II prison camps in North Africa, and cross-cultural forms of reparation.

J: Who do you hope will read this edited volume, and what sort of impact would you like it to have?

MA & SS: Our issue addresses prison, mass incarceration, political prisoners, the architecture of insurgency and counter-insurgency, prisoners exploited economically as forced labor, deportation to remote sites, and women in prison, as well as discussions of research methodologies involving archives, interviews, photographs, and paintings. These remain pertinent topics to this day for students of history and anthropology, and in fact anyone interested in the study of colonial forms of repression. Given the current situation in Algeria, this special issue addresses protean reversibilities and possibilities for repression. We also try to highlight those tools to understand the return of history and its attendant dangers.

MA & SS: Susan has guest edited a volume of the Journal of North African Literature on “Historical Preservation in North Africa” (volume 25), due out 2020. The issue includes her article on two French colonial monuments in Sidi-Bel-Abbès, Algeria, headquarters of the French Foreign Legion until Algerian independence. Marc’s article in the same issue is on Algerian political prisoners incarcerated in Montluc Prison in Lyon, France, whose bodies were repatriated to Algeria between 1969-71. We are also both co-authoring an article on Algerian women and prison for the Moroccan journal Hésperis-Tamuda as part of a special issue on the anthropology of North Africa, guest edited by Aomar Boum, anthropologist, and Rahma Bourquia, sociologist. Marc is currently completing a book on the layered histories of Montluc Prison in Lyon. Susan is researching a book on the fates of French colonial architecture and monuments in post-independent Algeria.

J: Does your volume affect current events in Algeria and the Hirak (movement) in the Maghreb?

MA & SS: Political prison continues. The question remains as to who fills the prison cells and who gets to put them there. In contemporary Algeria, as well as throughout the Maghreb, current forms of incarceration have added to the colonial heritage such that those imprisoned are less the dissidents opposing French colonial rule, but rather the independent state’s own citizens. In many cases, these prisons were, and are, longstanding sites of repression from the colonial era into post-independent Morocco, Algeria, and Tunisia.

Excerpt from the special issue

With a majority of buildings erected in the colonial era and maintained in use after independence, prison is the ultimate “Panopticon” with which to reflect on two centuries of Maghreb history. Specifically Algeria — settler colony for 132 years, comprising three French departments and marked by two long wars of conquest (1830-1871) and decolonization (1954-1962) — offers a rich field of analysis to understand not only similarities in the different prison systems built overseas but also the legacies of this system after independence in Algeria as in France. Prison was a tool of colonial domination, political repression, and economic exploitation. The colonized and the “undesirable” French (military and opponents), women and men, were detained in massive numbers within a prison network complex that encompasses a vast number of sites of repression transformed into prisons (camps, psychiatric hospitals, barracks, clandestine torture centers in rural areas, etc.). Prison was global phenomenon grouping together the colony, the metropole, and the penal colonies of French Guiana (Guyane) and New Caledonia. It was also, of course, a place of resistance entirely given over to the new Algeria. From a variety of sources (oral surveys, reports of psychiatric expertise, memoirs, fiction, films, art works as well as administrative, police, and judicial archives, etc.), differing approaches by anthropologists and historians along with some elements of comparison with Tunisia, this edited volume shows that prison — a “world apart” as indicated by the title of the collage chosen to illustrate the cover — was omnipresent. It still haunts our memories. Inevitable, then.