Review of How the Water Holds Me by Tariq Luthun 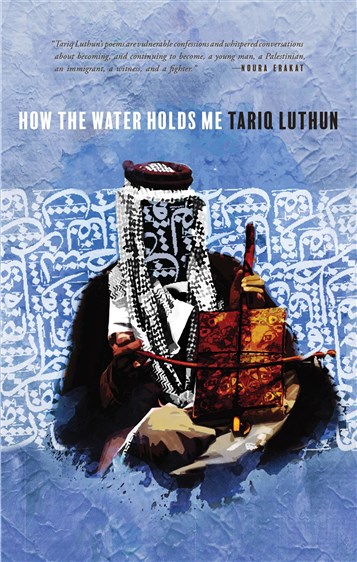 In April 2020, a Saudi Arabian comedy show, Makhraj 7, caused controversy when an actor advocated for normalization with Israel. Palestinians were framed as an enemy who did not appreciate Saudi Arabia’s previous support. The hashtag #PalestineMyCause  فلسطين_قضيتي# appeared in my Twitter feed on the same day that I read Tariq Luthun’s poem “Sermon (For Those Who Survive).”

Now, here, I am
miles away & leagues above, watching
my cousins in the Holy Land drown in someone else’s comfort;
another’s desire for luxury.

This word. Drown. The Palestinian cause continues to be submerged under others’ desires. This condition is reinforced with each generation.  Years ago, Abdul Rahman Munif wrote of Arab armies drowning in the mud of politics in 1948. Palestine is more than just a land and is larger than one generation, he said.

Now, generations later, Luthun, one of the finest Palestinian poets of the diaspora, keeps the cause of Palestine alive in his first chapbook, How the Water Holds Me. In his lyrical, rhythmic verse, I recognize the original waves of loss, shock, yearning, and love that swept into our diasporic Palestinian families in 1948, and how those waves return with each new generation. As a Palestinian-American woman, I relate to his experience of growing from childhood to adulthood on the shores of America and Palestine. Luthun has metaphorized the confusion and self-questioning of displacement into the hope of finding footing on a water’s shore. In “We Already Know This,” he takes us from the amniotic embrace of the mother—the water, to the embrace of the father—the land.

I don’t know if there is
a child, anywhere on this earth, that wasn’t,
at least once, held by their mother. Water:
where my mother held me
until I was given to land. O firm land —
how my father holds me — people keep calling
for blood, to dress you in it.

Luthun’s cadence is a reflective pulsing rap. His tone is at various times explanatory, declarative, conversational, and thoughtful. He has mentioned that Tupac Shakur is the reason he started writing poetry and Tupac’s influence is evident in Luthun’s measured, metered lines. From “Seed:”

When i meet my mother,
i talk to her like a man
talks to himself:

In several poems, Luthun reflects on his boyhood experiences and his journey through that ambiguous space between boyhood and manhood and between American and Palestinian culture. He connects individual moments to universal themes: the emotional toll that assimilation heaps on families when they are not welcome in their new communities; the bullying in dominant-culture schools; the accented father drawing the neighbors’ attention at sporting events; the shared experiences of brown boys aware of their otherness even in the midst of their home communities. From “Upon Leaving the Diamond to Catch 14 Stitches in my Brow”:

Our fathers — and the off-white
noise they let loose — didn’t help,
and might have
made matters worse.

He muses on the fragility of boys’ lives on the shore. In “al-Bahr” we are reminded of boys who did not survive: three-year-old Alan Kurdi, a Syrian-Kurdish refugee boy who drowned in the Mediterranean and washed up on a Turkish beach; Palestinian boys playing soccer on the beach in Gaza, purposely killed by the Israeli military. From “al-Bahr”:

but I saw
a boy that could have become
me wash up on a shore.
Along another, I watched all
the boys lose a match.

Luthun considers the individual events that create shelter for boyhood memories of hurt, of refugee memories of desperation, and of momentum for change. He imagines, based on past experience, the ability to step outside of this maelstrom when in flight, suspended between multiple, conflicting cultural experiences. From “Ode to a Brown Child on an Airplane for the First Time”:

Beautiful,
isn’t it, to be able to leave behind
this world, its lost and angry boys.

The Poet as Cultural Worker

Luthun refers to himself as a creative journalist and a storyteller. He is also a data analyst, a community organizer, and a poet. I reached out to him to learn more, and he emphasized that his work as a community organizer is intentionally voluntary. His work is centered on gathering community in order to take action around causes, whether those be local or international.

One can find hints of his journalistic awareness in his poetry. From “After Spending and Evening in November Trying to Convince My Mother that We’ll Be Fine”:

I imagine it isn’t easy to accept
that the coverage of
the world outside can be spun
so much;

There is also an aspect of cultural work in Luthun’s poetry. His verses preserve everyday cultural moments: the gathering of mint leaves for tea for his mother; the olive trees of Palestine: the brown boy on an airplane switching cultures between Michigan and his parents’ homeland. When I reached out to Luthun to discuss this observation, he responded:

I use poetry as a way to document the stories that I want to ensure live on long after our bodies have left this earth. To me, there are many forms of resistance, but one of the most important is to ensure that our history and truths remain intact, or else we will lose sight of who we are and what we stand for. Each poem is an opportunity to document our narrative, share that narrative with each other, and use that as a building block for our future.

Luthun uses his lyrical talent to preserve a people’s history of the diasporic experience. His poetry encapsulates the Palestinian-American experience as he articulates and reflects on our past and present realities.

Before I close, I must mention one aspect of Luthun’s chapbook that adds immense poignancy to our reading experience. Each page has a small key printed next to the page number. This key symbolizes the Right of Return: the Palestinian aspiration to return to their homes in Palestine. To this day, there are Palestinians who have keys to homes they and their families were driven from by Israeli Zionists in 1948. This small detail demonstrates the enormous commitment of Luthun to document Palestinian cultural experiences and values.

Readers will find much to contemplate in the compelling poems of Tariq Luthun in How The Water Holds Me. Find the chapbook at Bull City Press.