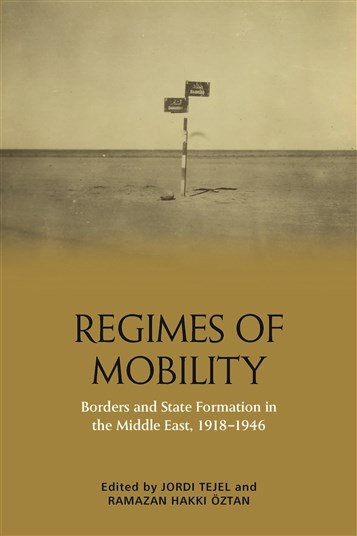 Jordi Tejel (JT): This volume is one of the most important outcomes of an ongoing research project (BORDER) on borders and state formation in the post-Ottoman Middle East, funded by the European Research Council (ERC) and hosted at the History Department at the University of Neuchâtel (Switzerland). As part of this project, we have organized a number of scholarly events over the past few years and this volume is the result of an international workshop held in Neuchâtel in October 2019. Scholars who attended the event discussed how borders were introduced to the Middle East, their impact on the existing socio-economic networks and on the flows of people (for example, smugglers, Bedouins, refugees, outlaws, merchants, and peasants), goods, and ideas. We interpreted these developments as part of a wider evolution marked by the collapse of diverse empires, the emergence of new nation-states, and the final stages of the first wave of globalization. Most scholars often address these entangled developments by either focusing on a specific case study or from a macro perspective. In this volume, however, we explore these processes through a borderland perspective. In doing so, we used the notion of “regimes of mobility,” which Nina Glick Schiller coined some years ago, as a way of proposing a dynamic and connected historical account.

Ramazan Hakkı Öztan (RHO): As Jordi mentioned, the book is a result of the workshop we organized in Neuchâtel before the start of the pandemic. This was an excellent gathering and this is not just nostalgia for pre-pandemic times talking. All the participants of this meeting really helped create an amazing intellectual synergy of scholarly reflection and intellectual exchange that motivated us all in bringing this collection of essays to a happy conclusion. Even though each piece is authored individually, we hope that the readers can therefore appreciate the volume as a collective conversation on borders, mobilities, and state formation in the interwar Middle East. In this sense, the volume also captures the voices and perspectives of the current generation of scholars on these issues and provides clues as to where the scholarship is headed. I would like to take this chance to thank once again all our contributors for making it really easy for me and Jordi to put this volume together. It was certainly a pleasure not only working with them but also learning from their insights throughout the entire process.

JT: Regimes of Mobility is engaged in conversation with several historiographies. First, as we mentioned earlier, is the profound belief that while we cannot disregard the nation-state framework or the respective political centers, alternative approaches are necessary for a renewed understanding of the making of the modern Middle East which includes, among many others, processes of boundary-making, refugee management, transportation policies, or discourses on national identity and territoriality. In that sense, borderland history allows us to rethink these processes by embracing cross-border mobilities as a point of departure, which highlights the potential of studying the cross-regional. In short, the chapters in this volume argue that borderlanders as well as a wide range of non-state actors trading, travelling, and at times subverting state policies in the borderlands played a relevant role in both shaping the state formation and globalization processes. Crucially, the observation of cross-border mobilities confirms that state formation and globalization were, actually, mutually formative processes.

The volume is also informed by all sub-disciplines of history—global history, connected history, transnational history—that underscore the significance of flows, connections, and itinerancy, without neglecting fixity, and therefore the potential contradictions these two apparently opposed dynamics can provoke. After all, the introduction of new borders and the reshaping of new regimes of mobility in the region had different repercussions depending on different factors, such as the context as well as the identity and/or the social status of borderlanders and trespassers. This issue is central, too, and I think contributors have successfully avoided conveying a sort of a-critical and, sometimes, celebratory narrative about globalization and time-space compression.

Finally, Regimes of Mobility is in conversation with environmental history. After all, human mobility is influenced, although not determined, by environmental factors such as droughts, pests, and diseases, as the current Covid pandemic has shown us. Obviously, as historians of empires have demonstrated, the prevention and regulation of movement to contain or deal with environmental crises has a long history in the region. Yet, the multiplication of new borders, new state authorities, and new international organizations made cross-border mobility—for Bedouins, smugglers, traders, travellers, pilgrims, but also cattle, insects, and germs—an even more sensitive issue from the 1920s onwards. In that sense, diverse chapters in this volume explore how non-human factors can also become the driving forces of mobility regimes, border-making processes, and ultimately the emergence of the modern nation-states in the Middle East.

RHO: To be sure, borders, mobilities, and state formation are themes that are central to the research of all our contributors, but as will be clear to the readers from the get-go, each author has a particular thematic, regional, temporal, and theoretical focus in their chapters. As such, the conversations and debates they are engaged with naturally vary. In general terms, however, it is possible to point out some of the generalities that underpin these individual research agendas. For one, any research on the interwar Middle East needs to come to terms with how one should approach the transition out of the empire and the gradual emergence of more national presents. The care with which our contributors frame this transition intimately speaks to the methodological and analytic discussions of the past few decades. As such, the contributions in the volume are informed by the critical scholarship that appreciates the extent of imperial resilience (and its implications after the collapse of the empire) and the very real ruptures introduced in the interwar years.

Perhaps the second element I could highlight is the willingness on the part of our contributors to look at the local. The readers of the volume will quickly notice, for example, that we have a motley of chapters that center on borderland communities and border-crossers alike, ranging from diseases to nomads, rebels to camels, cars to caravans, clergy to documents.  Even the chapters that squarely seek to bring the state back in and therefore focus on discourses and policies of political centers are informed by the central insights of borderland studies. Such a focus on the local I think successfully sharpens the way one could rethink the making of the modern Middle East. It is also a welcome empirical contribution that hopefully sets the volume apart from some of the more traditional historical accounts on the region.

JT: I have been working on the Kurdish issue in the interwar period for more than twenty years. The relationship between the border and the Kurds, on the one hand, and between the so-called political center and their respective peripheries was always present in my research. Yet, with my research project I wished to make the border and cross-border dynamics (violence, contraband, refugees, religious networks, and so on) the focus of interest. Instead of departing from the center to study the periphery, I wanted to start from the border zones and attempt to explain the state formation process in the Middle East from a borderland perspective. The issue of cross-border mobility was of course a part of it.

RHO: In addition to working on the borders in the Middle East, I have been studying late Ottoman revolutionaries, with a focus on the Balkan regions of the empire which I see as a heated theater of revolutionary politics during the reign of Abdulhamid II. I am particularly interested in understanding the impact of the introduction of new technologies of violence to the region, such as modern weapons and explosives, and explore what this tells us about the dynamics of violence in general. Studying the ways in which Ottoman revolutionaries tapped into illicit commodity circuits certainly informed my approach to territoriality, mobilities, and borders, which has been of course critical in editing this volume.

JT & RHO: We hope that the volume will bring late Ottomanists into conversation with historians of the interwar Middle East and, more broadly, historians of the contemporary Middle East with borderlands and mobility studies scholars. The chapters are also written in accessible prose which hopefully should make the volume appealing to non-area specialists and global historians, and useful in classrooms.

JT: I am preparing a monograph on the Turkish-Syrian-Iraqi borderlands between 1920 and 1945, which is also related to the current ERC project on the borderlands and state formation in the interwar Middle East. Hopefully, it will come out next year. And of course, I am already thinking of a new research project, but now it is too early to spell it out…

RHO: I am currently involved in two book projects. The first is a study that focuses on revolutionary politics of violence in the late Ottoman Empire. I hope to finalize the book manuscript this year. The second is a book-length project on the making of the Turkish-Syrian border, the history of which I approach from an angle of political economy. I have already made some strides in this second project, but I would like to focus on it fully after I finish my first monograph.

Excerpt from the book (from the Introduction, p. 25)

As the contributors to this volume make it clear, borders are where global flows meet regional and local, and the personal criss-crosses the institutional. As zones characterized by such a variety of networks, actors and interests, borderlands are home to multiple narratives and historicities. ‘Regimes of mobility’ therefore provides a useful tool to analyse similarities and differences across different border zones, even when borders that define these relationships may differ in their materiality and nature. As such, this volume seeks to move away from the tendency to study state-formation and border-making in singular case studies and instead highlights the interconnectedness of these processes across the region. This certainly does not mean that there is a single type of Middle Eastern border. Nor do we suggest that there is a preconfigured path of historical development, devoid of local variation.

The discussions in this volume instead help us flesh out two broad conclusions on border, mobilities and state formation in the Middle East. First, the transition to nation states in the post-imperial spaces required the renegotiation of legal, commercial, personal and religious networks and legacies. Older geographies of mobilites and well-trodden networks inherited from the Ottoman Empire certainly proved difficult to dismantle, but the developments throughout the interwar period also helped transform them. In this process, states not only sought to prevent mobilities but also to re-channel them in ways serving their own interests. Second, tracing individual trajectories, such as those of merchants and sheikhs, or institutional networks, such as those of churches and businesses, is a productive way through which we can uncover the agencies of borderlanders and illustrate the ways in which they came to interact with the authorities on both sides of borders. As such, borders transformed mobilities, while mobilities made border; states, on the other hand, drew their authority from the regimes of mobility they had sought to implement.