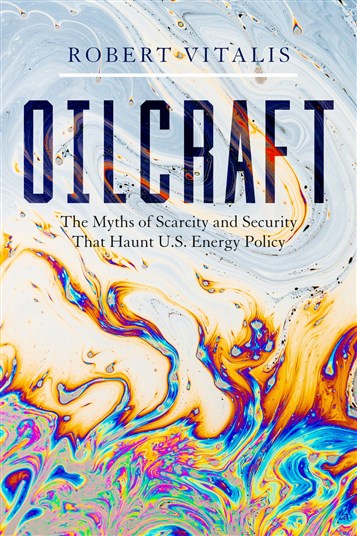 Robert Vitalis (RV): I gave my first talk in 1994 on what I saw as problems in how we think about oil and US foreign policy in the Middle East. My thinking on the question continued to shift while I was working on a book about the US oil company ARAMCO in the early 2000s and in the course of more talks, essays, and ongoing conversations with the late Ellis Goldberg, one of the two friends and scholars to whom I have dedicated the book. I was teaching in Beersheva in May 2010, where I first compared the pseudo-scientific nature our beliefs about oil and geopolitics with the pseudo-science of “race.” That was while I was writing my last book about the role of racism and imperialism in constituting the discipline of International Relations in the United States. As I was finishing White World Order, Black Power Politics: The Birth of American International Relations (2015), I stumbled upon a brilliant book by Karen and Barbara Fields, Racecraft (2012), the best book I know in fact about how and why the scientifically discredited idea of “race” persists, and, afterwards, I started using the concept of “oilcraft” in talks.

Back then, the great NYU historian Marilyn Young, to whom I dedicate the book as well, ran a private Listserv, and every time she posted something by Michael Klare about the geopolitics of energy, I would complain that it was goofy, and she would urge me to write something in response. I resisted. In the spring of 2016, however, Medea Benjamin invited me to participate in a Code Pink “Summit on Saudi Arabia,” where I listened to a lot more nonsense about oil and about the origins of the so-called “US-Saudi special relationship.” So, with a sabbatical coming up, and with no money to do what I most like to do, which is work in archives, I decided to write Oilcraft, with the hope, a pipe dream perhaps, that the next generation of progressives will be smarter than those who came of age during the so-called “energy crisis” and those, under their spell, who think that big oil controls US foreign policy or that the United States somehow controls the oil resources of the Persian Gulf.

RV: The objectives of the book are to take apart the myths about oil and geopolitics, the factitious “OPEC (Organization of Petroleum Exporting Countries) boycott,” the existence of a long-standing “oil for security” pact with Saudi Arabia, and the newest myth, that the kingdom was on some kind of liberalizing path in the 1970s, before the Iranian revolution ruined things—a path that the “reformer,” Muhammad bin Salman, is allegedly anxious to get back on. All of it is nonsense that, as I write, “continues to bedevil clear thinking, cogent analysis, and meaningful oppositional political action.”

RV: The most basic connection is that it challenges some deeply ingrained beliefs that nonetheless have no basis in reality. My first book, When Capitalists Collide: Business Conflict and the End of Empire in Egypt (1995), reported on what I found in the archives that did not fit the then Marxist and nationalist conventional wisdom about Egyptian capitalists in the early-to-mid twentieth century. America’s Kingdom: Mythmaking on the Saudi Oil Frontier (2005) challenges and I hope has displaced the conventional account of ARAMCO’s alleged difference from other western oil companies in the Middle East and its alleged commitment to “developing” or “modernizing” Saudi Arabia with its “partners-in-progress,” the Al Saud. White World Order, Black Power Politics: The Birth of American International Relations (2015) undermines the veracity of the story that two or three generations of IR scholars in the United States and elsewhere tell about the origins of their discipline. By the way, Vijay Prasad urged me not to limit my account to the history of the professors but to tell a bigger story about US foreign policy. Well, the book about the professors has sold more copies than my studies of US-backed capitalist development in Egypt and the role of oil firms in Saudi Arabia combined! Let’s see how this one does.

Oilcraft continues in this myth-busting vein, obviously. It takes up an argument that I made in the conclusion of my history of IR. I said that racism continued to influence our understanding of world politics after 1973 in the way policymakers, journalists, scholars, and activists constructed their accounts of the alleged threats posed by the leaders of oil producing countries in the Middle East and elsewhere or, on the left, the myriad accounts of the Al Saud and its subservience to US dictates—the late, great Fred Halliday to the contrary notwithstanding.

It is a departure however in that, as I noted, it is not grounded in original archival research. I wrote it all from my office, using secondary sources, newspaper archives, and JSTOR. Writing it made clear to me that there is a archival project waiting to be pursued, just not by me, which is to use the Ford Foundation records to excavate the history of the project they launched in 1972 (note the date well) to resolve the country’s alleged looming “energy crisis.”

RV: Oilcraft is a departure as well in that I did not write it for professors or other specialists—although it would be great for use in the classroom—but instead for the left and for anyone else who cares about reversing the disastrous course of militarization of the Gulf, justified too often on the grounds that “we” need to “secure access,” which progressives think is code for “controlling” oil or exercising hegemony over western Europe and Japan or keeping prices low or high for the benefit of big oil. We should be challenging these factitious beliefs rather than embracing them.

RV: I have gone back to the archives and am studying the thinkers, foundations, and research organizations that began to constitute a militant rightwing in US national security studies in the 1950s and 1960s.

The trillions spent are all the proof that believers in the idea of United States control of Persian Gulf oil can muster since there is certainly no evidence that the actions of successive administrations have increased the supply or lowered the price refiners pay for oil in any tangible or measurable way. That’s more or less what Columbia University political scientist Parker Moon thought back in the 1920s, when trying to understand the “mid-Victorian mirage,” “patriotic haze,” and the “mist…of national self-sufficiency” that had led the governments of the United States, Great Britain, and other imperial powers to spend enormous sums—although a drop in the bucket in comparison to the costs of U.S. force projection today—to subsidize the operations of private mining firms, rubber and sugar plantations, and the like, which, through some kind of mysterious and unspecified alchemy, secured control of vital raw materials for the country itself or its leaders allegedly on behalf of its people.

Such material treasures are something the public can visualize, something the statesmen can understand. Who can doubt…that a mandate [to wit, Iraq] permeated with petroleum, is a prize worth fighting for? It requires either sophistication or highmindedness to entertain such doubt.

Moon’s point has lost none of its force a century later. The geopolitical “mind” now as then presumes what needs demonstrating: What does control of oil mean and importantly how does this hidden (and in some versions not so hidden) power operate? Those who have sought to do so—that is subject their beliefs to testing–have come up empty handed. Worse still, others make bold claims that cannot be falsified but must be taken on faith, like the existence of God. I’ve concluded that the idea of U.S. control is a mirage. And discovering in the archives that policy makers might have sought this objective doesn’t resolve an analytical problem. Instead it simply elevates one more “strategic rationale” above the others. It is no more meaningful than saying that policymakers were or are driven by concerns about “credibility,” “power vacuums,” “civilizing missions,” “democracy promotion,” and the like.

Policy makers persist in defending their actions in these terms—whether or not they believe them—given the high political costs in being second-guessed by domestic opponents and rivals. As we will see, arguments about access are, like these other rationales, deeply engrained, and leaders find it too risky to do otherwise. As Peter Trubowitz persuasively demonstrates in Politics and Strategy, acting on such grounds may be costly in the long term. Presidents and their advisors however have high future discount rates and worry more about how failing to act decisively in the short term threatens to undermine their ability to win on other issues that matter, let alone their party’s and coalition’s political future.

My presumption is that, in contrast to leaders, we can reliably take intellectuals at their word. That is, they believe it when they write that the Soviets posed a threat to western oil supplies from the Gulf in the 1970s or that the United States controls the price of oil today through their “clients” the Al Saud (“House” of Saud) or controls its allies and rivals through its military presence or acts at the behest of western oil firms or is locked in a geopolitical struggle to monopolize what remains of a dwindling strategic resource. They hold fast to their beliefs about oil the way others do about the biological existence of “race” and racial difference, while conjuring what they consider evidence in support in much the same way.

One objective of the book is the recovery of the early twentieth century progressive era’s original exposés of the strategic rationales behind the “new imperialism” and the ever-elusive security of supply of raw materials of all kinds. Resource imperialism’s bubbling cauldron of ideas, a mix of equal parts social Darwinism, neo-mercantilism, geographical determinism, and scientific racism, has lost little of its potency over the ensuing century. Oilcraft’s debunkers today who are likely unaware of the earlier refutations of scarcity ideology, are located primarily on the right, not the left, and promoted by the CATO Institute rather than the Open Society Foundation, Institute for Policy Studies and the Nation Institute. The contemporary Anglo-American left appears wholly under its spell.