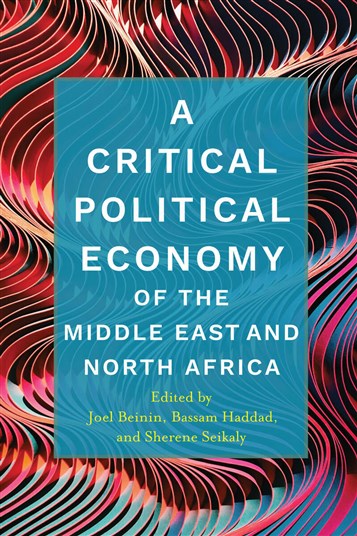 Joel Beinin (JB): This is the introduction to the book, so someone had to write it! More seriously, we wanted to promote political economy methods of studying the Middle East and North Africa. Political economy has made a big comeback as scholars have become more interested in the study of global capitalism, roughly since the 2007-08 financial crash. So, we wanted to make sure that the MENA region was part of that discussion. The introduction gives a very expansive definition of political economy—one that covers both the approaches that the authors of the various chapters adopt, as well as other approaches. We could never have presented examples of all the different forms of critical political economy analysis in one book. So this is, in part, an invitation to others to address issues and adopt methods that the book does not include. We hope that the expansive definition of political economy, the discussion of major cross-regional themes—such as polymorphous capitalism state market and class, oil, and the regional military industrial complex—and the wide range of countries covered, including the Maghreb and Gulf Cooperation Council states, which are less commonly included in such volumes, will make the book suitable for course adoptions.

JB: The introduction includes a critique of works that call themselves political economy, but which do not depart significantly from the conventional wisdom. It also provides very condensed accounts of the emergence of a world capitalist market, the intersection of gender and empire, the emergence of a post-World War II US-led global regime of capitalist accumulation—the Bretton Woods system and, since the late 1970s, the neoliberal or “flexible” regime of capital accumulation—and a summary of the political economy critique of Orientalism and modernization theory in Middle East and North Africa studies.

The introduction also sets out the structure to the book and contextualizes the following contributions:

State, Oil, and War in the Formation of Iraq – Nida Alahmad

Repercussions of Colonialism in the Occupied Palestinian Territories – Samia Al-Botmeh

JB: I have used a political economy approach in much of my writing since my first book (co-authored with Zachary Lockman), Workers on the Nile: Nationalism, Communism, Islam and the Egyptian Working Class, 1882‑1954 (Princeton University Press, 1987; 2nd edition, American University in Cairo Press, 1998). Sometimes it has been explicit and sometimes it was in the background, as in The Struggle for Worker Rights in Egypt (Washington, DC: Solidarity Center, 2010).

JB: The entire book is pitched at the level of advanced undergraduates and MA or first year PhD students. The introduction, in particular, is a good way to introduce students to a range of concepts that can be developed in greater depth according to the pedagogical need.

JB: I have been thinking about a synthetic book on “The Middle East and North Africa Since World War II.” But it has been difficult to concentrate on it and actually get the work done during the Covid epidemic.

J: What is missing from the book?

JB: There are two kinds of things missing from the book. The first omission is geographical. There is nothing on modern Turkey or Iran. If we were being really expansive in our definition of the region, we might also have considered Sudan and Afghanistan. The second omission is thematic, but it is really methodological. None of the chapters address gender issues seriously. We did not want to have a separate chapter on “women,” which would work against the whole concept of gender as a category of analysis. We might have had a chapter that used social reproduction theory. Considerations of length (and therefore the price of the book) imposed certain limits. But I think the more fundamental issue is that while there is a tremendous amount of excellent work on gender in the MENA region, there is much less work that adopts methods comparable to those in Tithi Bhattacharya’s edited volume, Social Reproduction Theory: Remapping Class, Recentering Oppression.

Excerpt from the Introduction

This volume seeks to stimulate a broad discussion on studying the Middle East and North Africa (MENA) using the methods of political economy. Political economy addresses the mutual and historical constitution of states, markets, and classes. Traditionally, class analysis—the historical origins and trajectories of classes, the relations among them, the articulation of local classes with regional and global markets, states and empires, and the institutional, legal, and cultural forms that sustain and situate them in complex social formations—has been the most distinctive form of political economy. Class analysis emphasizes understanding social life through the relations between the producers and expropriators of wealth. It has historically been associated with an ethical/political commitment to radical material equality.

While class has often been the conceptual entry point of political economy, we propose a more expansive understanding of political economy influenced by the concept of overdetermination. In this perspective, causes are simultaneously effects; all events are situated in a relational matrix; all social hierarchies are subject to contestation. Analytical categories are neither objective facts nor merely discursive constructions; they may be reconfigured by debates over their meanings and social struggle.

Class is a social relation; one class implies the existence of at least one other class. Capital is a social relation based on the extraction of value from the direct producers of commodities, which capital then sells to realize a profit. In volume 1 of Capital, Karl Marx elaborated an abstract analysis of the dynamics of capitalism. But historical social formations in which capitalist relations of productions predominate are always more complex than this abstraction, as Marx himself acknowledged. Class analysis alone cannot explain everything about social formations; neither can they be adequately understood without it.

The historical development of social formations dominated by capital is inextricably intertwined with genocides, slavery and other forms of unfree labor, racialization, patriarchy, national oppression, and empire. For example, the history of the nineteenth-century English textile industry is organically connected to slavery in the American South, the transformation of large parts of Egypt into zones of cotton monocropping where large landlords dominated peasant sharecroppers or seasonal day laborers, and the soil degradation caused by intensive cotton cultivation. Construction of the two Aswan Dams was partly motivated by the desire to expand cotton cultivation. Those dams wrought ecological damage, the proliferation of schistosomiasis and malaria, the inundation of Nubia, and the migration of Nubians to Cairo and Lower Egypt, where they often became workers in racialized occupational categories.

The establishment of the Misr Spinning and Weaving Company in al-Mahalla al-Kubra, Egypt, in 1927 entailed not only the transformation of peasants into a new class of mechanized textile production workers and the repositioning of hand loom weavers in the textile industry. Many of these new “workers” still owned or rented agricultural lands. For a generation, at least until the massive strike of 1947, their social identities remained shaped by their villages of origin. Capital also formed ambiguous class fractions like shop floor foremen. As Hanan Hammad’s Industrial Sexuality: Gender, Urbanization, and Social Transformation in Egypt demonstrates, new class and gender relations were co-constituted in both the workplace and wider urban space. Women worked in the factory while entrepreneurial Mahallawiyyat (female city natives) rented rooms to male factory workers who migrated from surrounding villages. Factory life shaped new cultural conceptions of masculinity and forms of urban violence, sexual harassment, child labor, child molestation, and prostitution, and sometimes made homosexuality more visible.

These examples suggest that merely seeking to revise Marx’s abstract definition of capitalism—a mode of production based on private ownership of the means of production (capital) to produce commodities for exchange in markets and profits derived from exploitation of free wage labor—is unlikely to enhance our understanding of the social world. Capital accumulation by individuals, partnerships, and even contemporary corporations can occur through exploiting many different forms of labor as well as cheap nature. Apple is the largest corporation in the world with a market valuation of some US$1 trillion. Foxconn, the largest employer in China, assembles most of Apple’s iPhones in factories in Shenzhen and other Chinese cities. There are good reasons to doubt that Foxconn’s workers are free in the commonly understood sense of the term. But they undoubtedly form a key class in the contemporary capitalist mode of production.

The ambit of political economy also includes the legal, political, and cultural forms of the regulation of regimes of capital accumulation; relations among local, national, and global forms of capital, class, and culture; the social structure of reproduction; the construction of forms of knowledge and hegemony; technopolitics; the environment as both a resource and field of contestation; the role of war in the constitution of states and classes; and practices and cultures of domination and resistance.

Circuits of production, finance, and commodities are often imbedded in ethnic or sectarian networks and intertwined with imperial and patriarchal structures. The confluence of class, sect, and political orientation informed the 1975–90 Lebanese civil war. Classes may emerge from or alongside status groups like tribal shaykhs, sayyids (descendants of the Prophet Muhammad), ‘ulama’ (scholars of Islamic learning), or the effendiyya (those educated in a Western style and employed in professions and modern-style businesses). A status group can become a class. In contemporary Lebanon and the Gulf Arab states, domestic workers are commonly migrant Filipinas or South Asians. Their positions as wage workers, as vulnerable women exposed to sexual and other forms of abuse, and as noncitizens are inseparable.

Political economy is not simply the intersection of previously existing disciplinary boundaries (politics and economics). It seeks to critically examine disciplinary, geographic, ethnic, and sectarian boundaries. Those boundaries, many of them constructed from the late nineteenth through the mid-twentieth centuries, obscure social hierarchies, society as a wholistic object of investigation, and the contradictions of the capitalist mode of production. They divide the world into units conducive to imperial rule, encourage construction of romanticized national and communal histories, and establish standards of common sense and normality that criminalize or marginalize ideas, identities, and behaviors that challenge the existing order.

These broad strokes do not prescribe a single “correct” analytical method. We understand political economy as a family of intellectual orientations and research methods and eschew ideological claims that it is “scientific” or “objective.” Its intellectual genealogy includes, but is not limited to Adam Smith, Karl Marx, Rosa Luxemburg, Antonio Gramsci, John Maynard Keynes, Karl Polanyi, the Monthly Review school, Dependency and World-Systems Theory, Black Marxist traditions, the socialist current of second wave feminism, and neo-Marxian currents including the “Regulation School,” “Social Structures of Accumulation,” “Social Reproduction Theory,” ecosocialism, and studies of technopolitics. The authors of this volume embrace the methodological pluralism this genealogy implies.