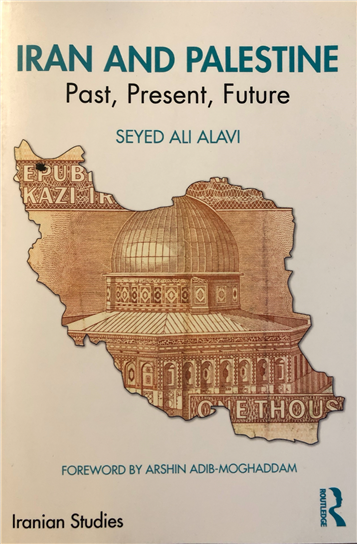 Seyed Ali Alavi (SAA): The book is based on the doctoral dissertation I completed at the School of Oriental and African Studies (SOAS), University of London. My doctoral research centered on theories of international relations, with the main focus on the relations between Iran and Palestine—the first scholarly project on the subject matter. The question of Palestine, and the Iranian role in it, lingers as one of the most vital dynamics in the contemporaneous international politics of the Middle East. Before I started working on my research, I was astounded that there was no single authored and academically written book about the subject matter. Despite its uniqueness, and the propaganda being nurtured by well-nourished media outlets allied to the right wing in Israel, there is no structured examination of Iranian-Palestinian relations out there. With this book, I aim to initiate a crucial inauguration to a new deliberation about Iranian-Palestinian relations, which is necessary in terms of both scholarship and wider public dialogue.

SAA: Examining the nature of relations between Iran and Palestine, this book investigates the relationship between the state and authorities in the Middle East. Analyzing the connections of the Iranian revolutionary movements, both the Left and the Islamic camps’ perspectives are scrutinized. To provide a historical background to the post-revolutionary period, the genealogy of pro-Palestinian sentiments before 1979 are also traced. The book contextualises the events from the beginning of the Palestinian predicament to the post-Arab spring era.

In demonstrating the pro-Palestinian stance of post-revolutionary Iran, the study focuses on the roots of the ideological outlook and the interest of the state. Despite a growing body of literature on the Iranian Revolution and its impacts on the region, Iran’s connection with Palestine has been overlooked. This new volume fills this literary gap and enables readers to unpack the history of the two states. Such unique and comprehensive coverage of Iran and Palestine’s relationship is a key resource for scholars and students interested in international relations, politics, and Islamic and Middle East studies. Ultimately the project aims to answer the question as to what the roots of Iranian pro-Palestinian tendencies are. The book transforms the notion of solidarity into a concept of desire for justice. In order to complete the book, I conducted valuable interviews with Palestinian high representatives in Iran and some Iranian prominent academics active in the sociology of the Palestinian cause.

SAA: I hope that students, researchers, historians, and everyone interested in the politics of Iran and the Arab world, particularly Palestine, would pick up this book. In terms of impact, this book tries to initiate a new discourse beyond sectarian dichotomy in the Middle East. It aims to highlight the conception of solidarity between the nations in the region beyond ethnic and sectarian attachments.

SAA: I have started working on a second book project on the role of regional and global rivalries in shaping today’s Iraq. I am interested in examining the impact of international relations post-2003 on Iraq’s political fabric. I find it fascinating how media outlets attempt to dichotomize Iraq’s sectarian and ethnic decoration and its connection with Iraq’s neighbors.

The Islamic Republic’s projection of power and influence: the dream of leading the Islamic Ummah

It is perhaps stating the obvious that the Islamic Republic of Iran is a state underpinned and infused by revolutionary values and Islamist politics. Anti-Zionism, suspicion towards the United States, and the Ummah-centric approach of Iran sit comfortably alongside the Islamic Republic’s strategic interests and ideological outlook. In other words, strategic interests complement the identity of the state. I would add, however, that the primary reason for why Iranian revolutionaries from diverse political backgrounds have comfortably reached a consensus on supporting the Palestinian cause is the universal acceptance of the need to defend what is perceived to be a just cause. The depth of this was registered during the Islamic revolution with the introduction of the words mastazaafeen (oppressed) and mostakbereen (oppressors).

Hence, the Palestinian cause has become strategically advantageous for the Islamic Republic in the sense that it has allowed Iran to convey its political discourse of resistance and emancipation throughout the region, which in turn has given Iran power and influence herein. Various factions in the Islamic Republic underline the Islamic revolution’s ideas in an attempt to boost Iran’s credibility as a “leader” of the Islamic Ummah. Iran’s leadership has likewise constructed the Palestinian cause as a yardstick for quantifying Muslim resistance against “global arrogance”. This logic is echoed by Yvette Hovsepian-Bearce, who argues:

The Supreme Leader of the Islamic Republic, Ayatollah Khamenei perceives Iran to be the leader of the Muslim World and foster parent of Palestine. As such, he regards Palestine’s and Iran’s interests as one. According to the leader, Iran’s ability to export its cultural revolution and vigorously fight as Palestine’s champion against Israel is part of Iran’s global appeal to oppressed nations. He will continue to assert this militant stance against all internal and external criticism of Iran’s support of the Palestinian cause.

While the Islamic Republic does not credit itself with having solely ushered in the Muslim resistance groups of Palestine, it does regard Palestine as the main front-line against Zionism and imperialism. Although the emancipation of Palestinian land is respected first and foremost as a Palestinian obligation, the Islamic Republic has remained a major supporter of the Palestinian resistance within the convenient legitimating framework of “Islam”. Since the Islamic revolution, the Iranian leadership seems determined to avoid bargaining over its commitment towards its principled support for Palestine and resistance against Zionism.

For the Islamic Republic of Iran, the Palestinian cause transcends geography and thus sits comfortably with its strategic objectives due to the ease with which it reflects its revolutionary ideological values. The trajectory of Iran’s pro-Palestinian position provides a number of vital analytical lessons. First, ideological principles – such as the desire for independence, resistance against the hegemony of superpowers or solidarity – are not simply imaginary constructs but strategic preferences that appeared and materialised due to Iran’s contemporary history. Second, ideology and national interests can be conjoined. In the Islamic Republic’s discursive fabric, revolutionary values are synchronised and conciliated with the state’s national interests and therefore can be mutually reinforcing. This approach helps us to understand Iran’s aims to widen its outreach towards the Arab world, particularly towards the Levant. Some of the Islamic Republic’s strategic aims – particularly those related to Palestine and the Ummah – can be complex for some to comprehend unless we are able to position them within a proper ideological context. The decisive objectives of the Islamic Republic are the renunciation of Zionism and the rejection of dependency on foreign powers. If we return to the conceptual framework followed in this study, we can safely deduce that there is a continuity in how Iran expresses its pro-Palestinian stance and its actual policies. Iran’s policy towards Palestine did not, however, simply develop only after the Islamic revolution. The pre-revolutionary era demonstrates that many opponents of the Shah’s regime also expressed solidarity with the people of Palestine. Hence, this study has also suggested that Iran’s relations with Palestine cannot be simply reduced to opportunism or a desire to exploit the Arab world for material benefit. While some in the Western world and even within Arab states may regard Iran’s pro-Palestinian stance as solely opportunistic, such analyses overlook six decades of solidarity demonstrated by Iranian activists – including those with left-wing ideological tendencies – towards the Palestinian cause.