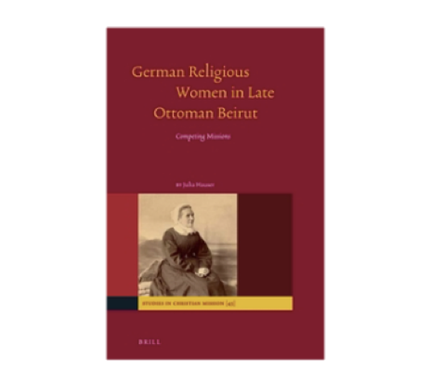 Julia Hauser (JH): Having been interested before in the history of charity and the history of travel on the cusp of imperialism, I had the idea of writing a book about the influence of travel on the founders of charitable establishments in Europe during the “long” nineteenth century. One person in my sample was Theodor Fliedner, a Prussian pastor who founded the Kaiserswerther Diakonie, an organization for single Protestant women employed in nursing and education, in 1836. Fliedner then went on to establish several hospitals and schools run by the deaconesses. Eventually, they were present in six major cities of the Ottoman Empire and Egypt. When I realized the wealth of sources on these establishments alone—about 2,500 handwritten letters from deaconesses on each of these “stations,” as they were referred to—I decided to focus on just one of them, their establishment in Beirut. This establishment consisted of two distinct institutions divided by class and race: an elite boarding and day school for children from European and wealthy local families, and an orphanage free of tuition for children from supposedly non-elite local families. I became interested in the question of how their mission changed in the course of the encounter due to negotiations with students and their families in Beirut, local authorities, and other organizations with similar aims. As one of the nodal points of the Nahda (renaissance), Beirut saw a rapid expansion in the field of education in the second half of the nineteenth century, a situation from which missions and their respective states sought to profit, but which also put them in competition with other establishments and under the scrutiny of the Ottoman state. This is very much mirrored in the deaconesses’ sources.

JH: Firstly, the book addresses the history of cultural encounters generally, and that of missions in particular. In the latter context, missionaries have long been depicted as pioneers in the older literature. In line with more recent research, my book shows that they were, to the contrary, very much dependent on, as well as challenged by, their local environment, be it their clientele, other organizations or local authorities. Hence, they adapted their policy to these exigencies (in the deaconesses’ case, this meant, inter alia, offering instruction in French in the elite part of their establishment and admitting their students’ young brothers to this school). Secondly, the book addresses the growing literature on missions and imperialism. While both were fueled by the idea of the civilizing mission, my study makes the argument that missionaries, again because of their dependence on their clientele, did not always act in the interest of their respective governments. Finally, the book addresses the history of globalization, where, at least on the level of textbooks, women and non-state actors are often less prominent or appear as subordinate. As my study, in line with other recent research, shows, however, they were influential in helping introduce new notions of education and gender—and the fact that they did so was not merely due to their initiative but above all the cooperation and tolerance of their respective clientele.

JH: I hope that this book will be read by global historians as well as historians of imperialism, missions, gender, etc. I also hope that it will be read at least by some Ottomanists and historians of Beirut and the region, especially since their feedback would in turn be helpful for me. Although my book mainly draws on Western sources, it is the first English-speaking history of an organization that was an educational actor in the region in the late nineteenth and early twentieth century. The elite part of its establishment, a boarding and day school for children from Western and wealthy local families, was attended by children of some prominent local missionary, but also Beiruti, Syrian, and Ottoman bureaucrat families, such as the Van Dycks, the Sursocks, the Beyhoums, the Arslans, the Piciottos, or some of the numerous children of Mehmet Kamil Pasha, who would later serve as Ottoman minister of education (and, in this position, warn of the dangers of missionary schools).

Beyond these specific audiences, I believe the book also has a relevance for some present issues. Many of the stereotypes about Islam and the Middle East we encounter in the media, and especially in right-wing populism these days, have their roots in nineteenth-century discourse about the region, and missionaries were prominent exponents of this discourse. Missionaries argued that Islam was a homogeneous cultural entity (and a profoundly negative one at that). They saw themselves as bringers of light and freedom to a dark region. They claimed that women in the region were subjugated; that there was no idea of family life, and hence it was upon missionaries to forcibly disrupt existing family structures, separate children from their parents, and teach them new notions of family life. This is what establishments like the deaconesses’ orphanage—the non-elite part of their establishment—did quite actively, since by no means all children in their care were actual orphans. While missionaries’ beliefs were challenged and to some extent transformed by contact with their clientele, missionary publications for the home audience (on whose moral and financial support they depended) continued to feed into these stereotypes, and the wider discourse about the region continued to lend voice to these perceptions. I believe that becoming aware of the history of such stereotypes and practices can help us understand and challenge their present-day versions.

JH: This is my first book. Previously, I was interested in how women in nineteenth-century Europe carved out a space for commitment outside the private sphere through charity by employing the argument of spiritual motherhood, and which class-based hierarchies helped them to secure their newly won position. In my M.A. thesis, I examined a practice embraced by European scientific travelers in the late eighteenth and nineteenth century: the attempt of passing as a local by means of dress and language. It seemed to me that this practice was situated between late Enlightenment approaches towards the cultural Other as we find them in authors like Georg Forster, whose perspective was characterized by a hermeneutic approach and a sense of superiority that would come to be typical of nineteenth-century colonialism. Europeans could pass as locals if they tried hard; locals, on the other hand, could not pass as Europeans. Then again, the traveler in my case study, Johann Ludwig Burckhardt, was a traveler whose tone was a relatively modest one, frequently making fun of himself and acknowledging his indebtedness to his local fellow travelers, and who did develop a relatively respectful view of the region he visited. What connected these previous interests to my first book was, first, a focus on social work as a means of expanding women’s agency, and, second, exploring a gaze between empathy and a sense of superiority, as well as the regional focus: both Burckhardt and the German deaconesses visited what would later be called the Middle East. What divided them, however, was the issue of religion. Scientific travelers around 1800 were, for the most part, not interested in making converts. To the contrary, they sometimes developed an active interest in Islam.

JH: In my new project, I look into the importance of global references and networks in the context of organized vegetarianism from the mid-nineteenth century to the late 1950s, mainly focusing on Germany, Britain, India, and to a lesser extent the United States and the Middle East. In order to justify abstention from meat as a deliberate regime, European publications on vegetarianism from the mid-nineteenth century made ample reference to foodways in other parts of the world, claiming that the larger part of humankind did not consume meat. Especially in the context of the colonial encounter in India, vegetarian activists from Europe encountered seemingly like-minded protagonists from other continents, who, in turn, made reference to European vegetarian discourse in their writings. These debates were by no means only about food, animal welfare and health. Instead, they were connected to other forms of anti-vice activism, since supporters believed that meat triggered cravings for alcohol, sex and violence, thus contributing to a “degeneration,” as contemporaries would put it, not just of individuals but of societies and mankind at large. Abstention from meat, by contrast, was considered to purify individuals who then would act as a vanguard to the rest of society on a moral, spiritual, and physical level. Hence vegetarianism came to be tied to notions of purity, visions of a new mankind including eugenics, and concepts of new world orders: sometimes egalitarian, sometimes openly hierarchical ones.