Rashaya’s Transnational Suffering and the Making of Lebanon in 1925 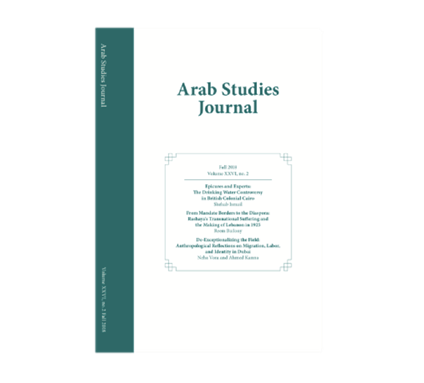 Reem Bailony (RB): This article grew out of my broader research on transnational and Syrian-Lebanese diasporic engagement with the Syrian Revolt of 1925-1927. The particular focus on the spread of the revolt to Rashaya in southern Lebanon and its transnational connections became obvious to me in the process of archival research. In almost all the archives I visited, there were traces of this story about how the spread of the fighting into the proposed Mandate borders of Greater Lebanon affected the local populations—particularly the Christians—of the border region. Rashaya in particular became the site of an important battle in November 1925, resulting in several civilian losses, numerous destroyed homes, with its population scattered to other parts of Lebanon. “The Victims of Rashaya,” as they came to be recognized, drew on their calamity to rally the Mandatory government for compensation while relying on the sympathy and donations of their compatriots abroad in the Americas. In demanding compensation, Rashaya’s displaced and their compatriots abroad argued that the Druze and rebel incursion into Rashaya posed a threat to the project of Greater Lebanon and Christianity in the region.

I decided to write the article because the rich source material had the potential to fill gaps in the history of the Syrian Revolt—particularly as it played out in Lebanon and the diaspora—by showing how the Mandatory government became vulnerable to Syrian-Lebanese diasporic networks.

RB: While the historiography on the 1925 revolt asserts that it was seminal in the development of a secular Syrian nationalism, the article argues that studying Rashaya and its transnational connections reveals the importance of the revolt to the creation of a confessional Lebanese republic. Moreover, Rashaya’s transnational campaign also reveals the ways in which the Mandatory government became increasingly susceptible to diasporic networks and their demands for developmental promises in the vain of Elizabeth Thompson’s work on the colonial civic order in Mandate Syria.

The article adds to a growing literature on the importance of the mahjar (diaspora) in studying the history of the modern Eastern Mediterranean, particularly since the region supplied half a million emigrants—mostly to the Americas—by World War I. This literature pushes back against histories circumscribed by nation-state borders, and which, as a result, overlook the importance of migration and migrants to the making of the modern Middle East. Starting in the late nineteenth century, Arabic speaking migrants participated in a dialectical relationship with homeland through remittance-sending, a robust émigré press, and various charitable and political associations that mobilized around issues back home. In doing so, they created a transnational political field that entangled state authorities, be it Ottoman or the French later on.

RB: I am currently working on a monograph, tentatively titled Transnational Rebellion: The Syrian Revolt of 1925-1927, that looks at the rebellion through the lens of the Syrian-Lebanese diaspora. While much of the monograph focuses on diasporic mobilizations in support of the rebellion and challenges to the League of Nations Mandates system, this article offers a window into the opinions of those who criticized the rebels, exploring how the revolt created opportunities for those in the mahjar to debate the future of Syria and Lebanon and contribute to nationalist understandings. In the broader internationalist moment of the 1920s, the events at Rashaya and the revolt more broadly reveal the ways in which global Syrian-Lebanese wrestled with and responded to the promises and failures of liberal internationalism.

RB: I think the article is well suited for audiences interested in the history of the Mandate of Syria and Lebanon, as well as those broadly interested in the role of the mahjar in the development of nationalist politics. It offers a story that takes the local (Rashaya) very seriously, while situated in a more global context. In so doing, historians of the modern Middle East can use the article in the classroom to challenge bounded histories of the region and to demonstrate how histories of the modern Middle East can be approached more globally through the lenses of migration and diaspora.

RB: I am currently exploring a history of the Druze notable Amir Shakib Arslan, which reassesses his life and politics through his mobility. Having recently acquired personal correspondence of Arslan’s from the Archives of the American University of Beirut as well as the Swiss Federal Archives, I hope to study the intersection of nationalist politics and transnational Islam through different chapters in Arslan’s life. A contemporary of early Salafist scholars like Mohammed ‘Abduh and Rashid Rida, Arslan was both an Islamist and a champion of a Syrian nation-state. The project will trace Arslan’s life moves from his brief stint on the Libyan front in 1911, to his maneuverings in Europe immediately after World War I, to his brief refuge in Mersin in the early 1920s, and his visit to Morocco in the 1930s. By centering mobility, the project will digress from William Cleveland’s biography of Arslan to explore the afterlife of empire through Arslan’s extensive personal and political networks in the Eastern Mediterranean, Europe, North Africa, and beyond.

J: What drew you to this topic?

RB: I came across this topic while doing my doctoral research starting in 2011. I was planning on doing preliminary research in Syria in the summer of 2011 for a topic related to women’s education in the late Ottoman period. However, the Syrian uprising was underway and I went to the Library of Congress instead. There, I came across journals such as al-Huda, al-Bayan, and Mir’at al-Gharb, all Arabic-language periodicals published in New York in the early twentieth century. As I started reading the issues published in the 1920s, I was captivated by the heated debates playing out over the 1925 revolt, including those related to Rashaya. Having witnessed Syrian-Americans around me get drawn into the Syrian uprising of 2011, I could not help but pursue this subject of the 1925 revolt further.

Excerpt from the Article:

Two years had passed since the 1925 battle at Rashaya. Yet the town’s campaign for compensation only continued to gain momentum. The French had good reason to believe that diasporic support was a threat to colonial stability. By April 1927, French intelligence estimated that nearly four million francs in donations to southern Lebanon had flowed from North America, allowing some to live “handsomely at the expense of relief committees.” As the French battled insurgencies in Morocco and Syria during the 1920s, the increasing pressure of growing financial costs as well as widespread anticolonial propaganda made them susceptible to Syrian-Lebanese transnational mobilization. Concerned with their global image in the face of their colonial entanglements and failings, the French closely monitored the activities of Syrian-Lebanese émigrés. The office of the high commissioner was primarily concerned with the fact that “opponents of the mandatory power” in Lebanon (Ghantus frequently came to mind) were exploiting the Mandatory government’s difficulties in influencing the “principal Syro-Lebanese colonies abroad.”

Accusations of the Mandatory government’s negligence threatened France’s international image. A counter-campaign was necessary to downplay the events that had transpired in Rashaya and to convince Syrians worldwide that the Mandatory government was making progress toward Rashaya’s rehabilitation. Like the Rashayan protesters, France, too, considered the role of Syrian-Lebanese emigrants crucial to any effort to win over the hearts and minds of their colonial citizens. In a report to Briand, then the French foreign minister, the French consul in Montreal noted that the Syrian community was often influenced by news of a more seditious nature. The French consul believed that “if the Syrians in Canada would no longer portray the French action in Syria in a biased and erroneous light, they would cease to encourage the opposition of their countrymen,” and more importantly would “stop playing the role of lawyer in the world for their complaints and recriminations.” “Americanized” Syrians, having benefited from “modern civilization” stood to act as educators and moderators between Syrians and the mandate government.

In order for Syrian-Lebanese communities in the mahjar to shape public opinion in France’s favor, they would have to come to believe French accounts of the events in Rashaya. Accordingly, Mandate authorities in Beirut frequently distributed reports to their French consuls in the Americas updating them on the situation in Rashaya, meanwhile familiarizing them with activities of Ghantus and his supporters in the mahjar. Consequently, Montreal updated the high commissioner, who then apprised the French consul in Santiago, Chile. One such incident that was recorded in these telegrams was a letter to al-Huda by a certain Emile Dawud, a recent Rashayan immigrant to the United States, and brother to Sulayman. The letter accused France of deceiving its agents abroad, who in turn deceived the Syrian migrants, into believing that the Mandatory government had already compensated the Christian residents of Rashaya. In fact, alleged Emile Dawud, the victims received nothing from France. The Ministry of Foreign Affairs appended this report to a dispatch to the French consul in Santiago, warning him against the “solicitations of Faris Ghantus and his cronies.” Consuls were instructed to do their best to muffle the exaggerations of the Rashayans loyal to Ghantus by reminding the protesters that other villages had fared much worse in terms of both death and destruction. Of the 110 Christians killed in Lebanon during the course of the “Druze revolt,” only eighteen were from Rashaya. Moreover, these figures did not include sacrifices endured by the French. The office of the high commissioner further instructed the consul to ensure that Syrians abroad knew that a total of 1.5 million francs of the sum seized from the Ottoman Public Debt had been set aside solely for the reconstruction of Rashaya.

In response to the biased information emanating from “Lebanese centers in America,” the high commissioner sent a general dispatch to French consuls informing them that efforts to rebuild Rashaya were underway. According to the dispatch, the “indiscriminate support by insufficiently informed American groups” made possible the exaggerated campaign of local agitators (mainly Ghantus) to obstruct the return of Christians under the pretext that they were not receiving compensation. Money flowing from the Americas proved that “the zeal of Lebanese for their compatriots” was strong. With agreement from the Lebanese government, the high commissioner would initiate a campaign to combat the efforts of Ghantus by winning over moderate-minded refugees who had been more or less grateful to efforts made by the Mandatory power, the Lebanese government, religious leaders, the Red Cross, and various private charities. Syrian colonies in America should be warned against the exaggerations of Ghantus, and in response be made “aware by their countrymen, and if possible by our consuls, of efforts to revive their little city.”

Reem Bailony, “From Mandate Borders to the Diaspora: Rashaya’s Transnational Suffering and the Making of Lebanon in 1925,” Arab Studies Journal vol. XXVI, no. 2 (Fall 2018).