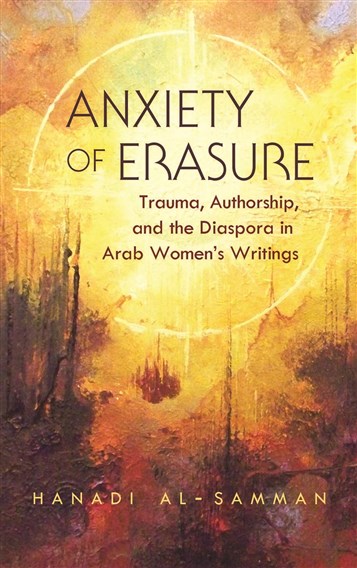 Hanadi Al-Samman (HS): I set out to explore the literature of Arab women writers in the diaspora—a topic that has not been addressed by other researchers. Of course, these women were recognized individually but not as part of a collective that acknowledged their unique experience of living on the margins in exile, or their critical contribution to Arab diasporic literature. Moreover, there is this perception that diaspora literature, otherwise known as adab al-mahjar, ended with the death of the members of al-Rabitah al-Qalamiyyah (the Pen Circle 1920-31) in North America and al-‘Usbah al-Andalusiyyah (the Andalus Circle 1932-54) in South America. My book sets the record straight by recognizing them as a continuation of the mahjar literary movement and by acknowledging their innovation in style, themes, and outlook, thereby helping in remapping the homeland’s cartography, pinpointing its political ills, and aiding in its resurrection from authoritarian state dominance.

HS: The book examines the literary output of six Levantine authors: Ghada al-Samman, Hoda Barakat, Hanan al-Shaykh, Hamida Na’na’, Salwa al-Neimi, and Samar Yazbek—all of whom chose to reside in Europe, but still not sever their ties to the homeland. By focusing on the various literary genres in which they experimented, such as autobiography, fantasy, travel, and war, I identify the innovative ways in which they redefine each and every genre. For example, Ghada al-Samman departed from the dominance of the individual authorial “I” of the traditional autobiographer to a more inclusive mosaic autobiography model that heeds the voices of multiple selves and seeks the cohesion of the collective nation and its inhabitants. In her use of the fantasy genre, al-Samman veers away from the traditional ‘Aja’ib (wonders) literature where pursuits of exotic and undiscovered frontiers are undertaken. Rather, from her diasporic locale, fantasy genre becomes an avenue to travel back to the homeland to revisit traumatic nightmares and to reflect on the causes of social and political strife. It is a vehicle to use the present to reflect on the past, in the hope of a better future. Similarly, travel genre moves away from a complementary gesture where the traveler seeks self-aggrandizement through his/her interaction with the foreign Other, to a more inclusive relationship involving two-directional dialogue and acceptance of the Other. War genre occupies a great deal of the book, with the coverage ranging from women’s contested participation in wars and national reconstruction (as discussed in Hamida Na’na’s works), to paradigms of dis-ease and domination afflicting Arab societal structures and engendering aggressive wars (as chronicled in Hoda Barakat’s oeuvre), to critique of authoritarian governments that massacre their own people (as in Samar Yazbek’s account of the Syrian Revolution). The unearthing of the archives of Arabic literature and the inscribing of unspeakable secrets of women’s annihilation (as in Salwa al-Neimi’s work), as well as the redefining of the field of Arab diaspora studies from a nostalgic to a critical stance intent on healing the homeland’s wounds, are the distinctive marks of Arab women diaspora writers addressed in this book.

HS: The book connects with my previous work on Arab women writers and feminist scholarship. It departs, however, from previous literary theories that defined the experience of authorship for Western male writers as dialectic, Oedipal interactions with their predecessors causing their “anxiety of influence” in Harlold Bloom’s postulations, or from Sandra Gilbert’s and Susan Gubar’s “anxiety of authorship,” which is engendered by the lack of female predecessors for western women writers. Rather, I argue that Arab women writers experience their authorship as an anxiety of a double erasure, both literary and physical. For example, it is not only the erasure of their maternal predecessor, as in the master narrator Shahrazad’s authorship in the frame story of A Thousand and One Nights, but also that of the female’s physical eradication exemplified in wa’d al–banat’s (female infant burial) jahiliyya practice. This is a significant contribution of my book, from where it takes its title, and through which the book foregrounds a literary theory for reading Arab women’s poetics.

HS: The book will be of interest to researchers and students of Arabic and comparative literature as well as gender and diaspora studies. To my knowledge, it is the first book that studies Arab women’s literature from the lens of trauma theory. It accomplishes this through its unique linkage of the jahiliyya’s buried infant trope of the wa’d to the erasure of women’s literary voices. It further widens its examination to cover the political and historical erasure of the voices of the Arab masses, in particular the personal erasure of female selfhood and of Shahrazad’s occulted literary voice in the written version of A Thousand and One Nights. In this regard, the personal and the political are truly interconnected.

HS: I am currently writing a book called Queering the Arab Closet, in which I examine representations of Arab queer subjectivity in literature, film, songs, and social media. I highlight the intersection of LGBTQ issues with the political and the cultural in the Arab world. I also set out to redefine the concept of the closet for Arab queers, which they insist that at times affords them a sanctuary rather than a prison. In this sense, the closet allows them to be free to exercise their own ritual of coming in to a certain chosen familial circle of supportive family and friends rather than embracing the coercive coming out process associated with the Western LGBTQ-pride performance ideology.

J: Why did you focus on connecting the tropes of Shahrazad and al-Maw’udah (buried female infant) in this book?

HS: All past scholarship on Arab women’s writings has employed Shahrazad’s trope, once the work moved from the oral to the written version,  as either a model to emulate or to veer away from. In my examination of Arab women’s diasporic writers’ literature, I also noticed the existence of al-maw’udah as another significant cultural trope in their oeuvre. Surprisingly, this trope has not only manifested itself in the works of writers who hail from Muslim backgrounds, but also Christian ones. For this reason, I believe that it is necessary to address the writers’ attempts to combat both the literary erasure of women’s writings signified in Shahrazad’s trope, and also the physical erasure of women’s bodies and traces that can be seen in the resurrection of wa’d cultural motif.

Coupling these two motifs in what I call “the anxiety of erasure” in Arab women’s poetics has the advantage of tracing the wounds enacted by both of these literary and physical traumas in the past, so as to transform the present and to illuminate the future. Just as the diasporic women authors transform Shahrazad’s corpus from orality to the written word, so in their work the surviving female body enables the physical, sexual, and symbolic resurrection of al-mau’udah as she enacts psychological and physical journeys, redefining cultural and political cartographies, and thereby proving that acknowledging the presence of the female body, voice, and narrative can and must lead to the transformation of the political and national as well.

Anxiety of Erasure uniquely examines the manifestations of Shahrazad’s and the maw’udah’s tropes in the literature of both Muslim and Christian mashriq diaspora women writers. Most of the writers in question engage in their own cultural remembrance of these two tropes in their writings. They materialize Shahrazad’s literary erasure and the historical nightmare of wa’d in their narratives, thereby bringing these traumas to the surface, and using them as a distant memory which propels the writing of their literature and inspires, above all, their survival.

The literature covered is of necessity transnational, since the diasporic site operates as a catalyst for this artistic canon. My research covers literature produced by women writers in Europe and in North and South America from 1920 to 2011. My book relies on the principle of cultural conflict and resolution to produce an understanding of the lost traumatic knowledge of Arab women’s erasure, and diasporic Arab women’s perception of themselves in both Western and Eastern mirrors. The book’s scope is also multi-generational, often dealing with the literary productions of both first- and second-generation emigrants, engendering in the process an intergenerational dialogic and traumatic haunting. For example, the issues raised by the South American diaspora female writers in the 1920s (discussed in chapter 2) find their echo in the scathing critiques that their literary successors–contemporary European diaspora writers–have leveled against the Lebanese civil war, the Gulf war, and the war in Iraq in the latter half of the twentieth century. The connection between these literary foremothers and cotemporary diaspora writers intensifies the urgency of locating Shahrazad’s literary trace in the traumatic past of the maw’udah tradition so as to resurrect women’s body and word to ensure feminine agency in reconstructing cultural and national narratives. What this book offers is a deeply imbedded, culturally-specific basis for reading Arab women’s narratives. Their works act as incentives to memory, as a way to speak to and for the lost, forgotten, or erased selves, encouraging readers to listen to the archives, to keep Shahrazad’s literary legacy and the buried voice of the maw’udah ever present.

Anxiety of Erasure proposes a transnational, intergenerational, mosaic framework for studying authorship and identity construction in Arab women’s literature. It seeks to rectify the state of female literary erasure, by broadening the scope of gender and geographic definitions of adab al-mahjar proper, and by shifting its focus from predominantly male writers residing in North and South American sites to women writers located in the European continent instead. Unlike previous scholarship, which addressed Arab women’s authorship from the standpoint of harem walls, veiling, and imposed silence, my study examines the liberating, re-centering role of diaspora in creating a reciprocated conversation with the foreign Other combined with an impact both on the streets of every Arab city (the women continue to publish in Arabic) and in the West that hosts them. My intention in amplifying their voices is to bring forward the writers’ urgent message of transforming orality into print, and of reclaiming the corpus of their foremother Shahrazad through revisiting the traumatic sites of the pre-Islamic wa’d tradition. The writers’ diasporic locales offer them a safe haven to challenge authoritarian states and censorship rules, and the fixity of essentialist concepts of nationhood. Their journey of national reconstruction is a transnational, interdisciplinary, and transformative project encompassing a broad spectrum of fictional genres: fantasy, autobiography, and war narratives expressed in novels, memoirs, journals, revolutionary diaries, and political commentary.

In Anxiety of Erasure, I propose a theory for understanding the narrative strategies of Arab women writers in diaspora, and a framework within which to decipher the perplexing persistence of female infant burial and Shahrazad motifs in literature penned by these writers over the last century. This project further questions literary trauma theory’s claims that traumatic knowledge can only be gained in ephemeral, oblique references, owing to what Freud and later Cathy Caruth called the “incomprehensibility,” and the “irretrievability” of traumatic events (Caruth 1996, 18). My book disrupts this prevailing view of traumatic knowledge by arguing that, through the process of intergenerational insidious trauma, the reenactments of the wa’d trauma in diasporic women’s literature do, indeed, make the traumatic event more “accessible,” thus engendering a corporeality that allows healing and an understanding of the traumatic past. In employing the two tropes of Shahrazad and the maw’udah, Arab women writers materialize the site of the traumatic past, making it retrievable to the diasporic granddaughters of these female figures whose awakening engenders a survival project for two entities: diaspora women, and their embattled countries.